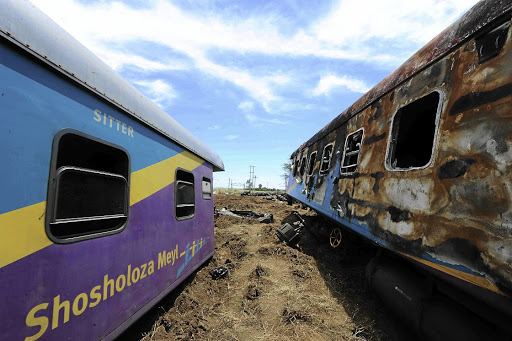 Several people were burned alive when they were trapped in a Shosholoza Meyl train that collided with a truck near Kroonstad in the Free State last week.
Image: THULANI MBELE

Some bodies of the Kroonstad train-crash victims are riddled with maggots and decomposing faster than their families can identify them, according to workers at the mortuary.

"Because they were burned, some of the bodies are decomposing at a quicker rate," said one of the workers, who may not be identified. "Some are obviously missing parts. Others have no arms or legs and are burned badly."

The worker said it would take more than a day for bodies to be positively identified by families. It's a race against time because workers could get sick from working with badly decomposed bodies.

First findings on cause of train crash out on Monday

The Railway Safety Regulator (RSR) will on Monday release a preliminary investigation report into the cause of Thursday’s Kroonstad Shosholoza Meyl ...
News
4 years ago

"It's not going to be easy. We are going to have to rely on DNA samples in this case," she added. "It's hot right now and some of these bodies were burned during the accident.

"Some bodies already have worms and it's difficult to work in those conditions.

"But we have a responsibility to the families. It's not important what we have to go through; the families have to get closure on the matter."

At least 19 people were killed when a train travelling from Port Elizabeth to Johannesburg collided with a truck that was said to have allegedly raced the train at a level crossing on Thursday.

Several carriages were derailed and some passengers were trapped and roasted alive in the coaches near Kroonstad in the Free State. Four children were among the dead.

Prasa) has blamed the collision between a Shosholoza Meyl train and a truck on human error.
News
4 years ago

One of the three mortuary officials, who also spoke to Sowetan yesterday, said the DNA identification process had to start urgently because of health issues that could arise from working with the corpses that are in a bad condition.

Another mortuary worker said some of the bodies were disfigured, and confirmed they had begun decomposing.

The workers cannot be named because they don't have authority to speak to the media.

Yesterday, the Passenger Rail Agency of South Africa (Prasa) said 15 unidentified people who were on board a Shosholoza Meyl train during the collision have been accounted for and that families of the four remaining have yet to come forward.

Prasa's Daisy Daniel said the agency yesterday met with some of the families of the deceased in a bid to facilitate an identification process and provide them with legal counsel on how to lodge claims.