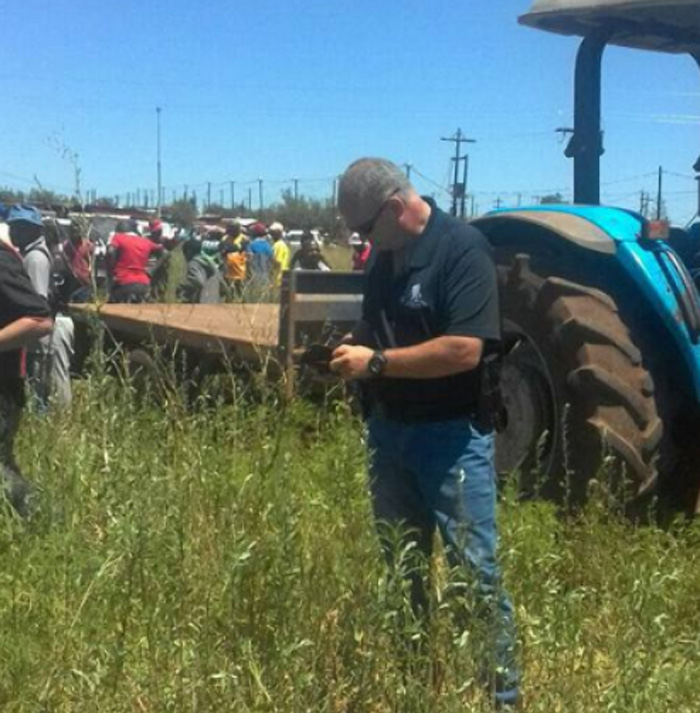 A Krugersdorp security company has spoken out against assumptions that the shooting of a black farmworker by a security officer was racially motivated.

A Facebook post by another security company that also operates in the Magaliesburg area has set out to clarify the circumstances that led to the fatal shooting of the 32-year-old on Saturday‚ after he had allegedly stolen a tractor.

The owner and author of the post did not wish for his company's name to be mentioned but said he felt compelled to post the information after reading incorrect media reports.

"After speaking to people close to the incident and as the facts emerged‚ I felt it necessary to publish the post‚" he explained.

Media initially reported yesterday that the shooter was himself a farmer following a Facebook post containing pictures of the deceased vicitm went viral. Later on Monday however it emerged the farmworker was killed by a security officer.

This publication has established that the security officer works for a company by the name of Razor Vox.

The security officer appeared in the Krugersdorp Magistrate's Court on Monday‚ and will appear again for formal bail application next Monday.

The post meanwhile labelled the media reports as "irresponsible"‚ saying it was stirring racial hate.

"It is crucial that the incident and facts are correctly reported‚" the post reads.

The family of a deceased Krugersdorp poultry farm worker want his killer to be harshly punished.
News
4 years ago

The company then gives an outline of the series of events to its knowledge:

"The farmworker arrived at his previous workplace earlier in the day‚ after he had absconded the week before. He displayed aggression and was requested to leave the premises and got into an altercation with his colleagues."

At this stage the company says the man stole the tractor with a trailer attached and drove from the Muldersdrift area to Tarlton‚ around 20km‚ where he was shot.

"He was riding (sic) recklessly on the N14‚ a very busy national road. The farm management requested their security company to trace the tractor after it was learnt that it had been stolen‚" the post continues.

The author explained that information surrounding how exactly the shooting occurred was not forthcoming at this stage.

"After numerous attempts to stop and encourage the illegal driver to pull over by the security company‚ the driver succumbed to his wounds‚" the post reads.

Members of the community nearby then turned on the security officer‚ overturning his vehicle.

The farm owner was not present at any stage.

The author also extended his condolences to the family of the farmworker‚ saying regret at the loss of life was heartfelt.

He urged that the police and courts should be allowed time and space to finalise investigations.