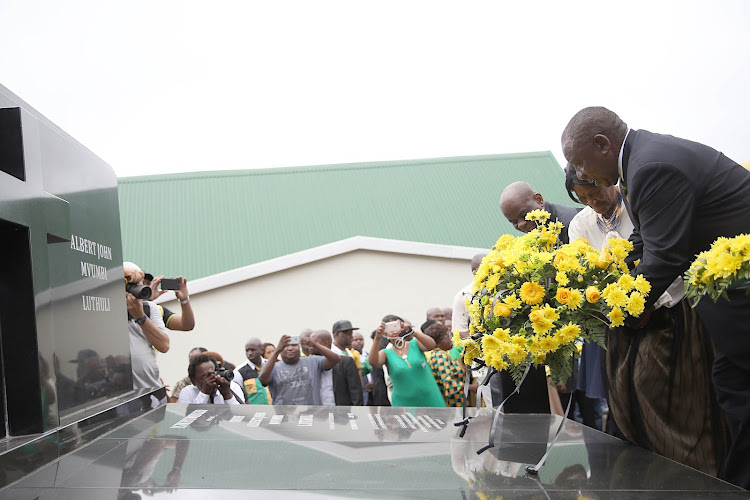 Her former rival and ANC president‚ Cyril Ramaphosa‚ didn't mince his words on the urgent implementation of those party policies speaking in KwaZulu-Natal on Monday.

The ANC president also had much to say on the issue of unity in a fractured KwaZulu-Natal province.

Ramaphosa and Dlamini-Zuma made their first high-profile public appearance together post the ANC conference on Monday with the latter living up to her pre-conference pledge of supporting her rival should she lose.

ANC president Cyril Ramaphosa and his former rival Nkosazana Dlamini-Zuma made their first high-profile public appearance together post the ANC ...
News
4 years ago

Ramaphosa‚ the top six officials‚ Dlamini-Zuma and several other national executive committee members were scattered around KwaZulu-Natal‚ participating in a number of pre-January 8 statement events being held over two days.

The traditional January 8 statement - which this year marks the ANC’s 106th anniversary - will be delivered in East London on Saturday.

Ramaphosa delivered two short lectures‚ paid homage to and laid a wreath at the gravesites of former ANC presidents John Langalibalele Dube‚ Dr Pixley kaSeme - both in Inanda - and Chief Albert Luthuli in Groutville‚ kwaDukuza on the KwaZulu-Natal north coast.

"We are not mad when we speak about radical socio-economic transformation when we emerged from the conference in December...the black majority should be recognised for their role in the economy. If they work in the mines and work the fields they are also entitled to share in the economy‚" said Ramaphosa.

Cyril, give us message of hope

A new year heralds new beginnings and, for many, a chance to start all over again with the hope of doing whatever they do better than the last time ...
Opinion
4 years ago

Ramaphosa said it was prudent to implement the policy in practical ways so that it does not benefit a chosen few.

On land issues‚ Ramaphosa said expropriating land should not be smash and grab but more about restoration and redressing the imbalances of the past.

"Restoring land to the rightful and original owners - this should be done in a manner that maintains and secures food security and does not affect agricultural production.

"I'm inspired by Chief Albert Luthuli who in the 1950s saw and used radical economic transformation at ground level here in Groutville‚" he said.

The ANC was dogged by deep divisions ahead of its elective December conference which saw Ramaphosa defeat Dlamini-Zuma by a close margin.

Dlamini-Zuma however did not speak throughout the programmes.

"Contestation is now over and the winner was the African National Congress‚" said Ramaphosa.

Clad in a black suit‚ white shirt and tie with ANC colours‚ a jovial Ramaphosa said the party should now rid itself of factionalism and forge unity in KwaZulu-Natal.

Ramaphosa also confirmed that he met and held talks with President Jacob Zuma on Sunday at Dube House in Durban but did not divulge anything about the meeting.

He called on provincial chairperson Sihle Zikalala and his "nemesis"‚ Senzo Mchunu‚ to smoke a peace pipe.

"Yesterday we met his majesty King Goodwill Zwelithini and he said he wants to see a united KwaZulu-Natal ANC leadership. It was also great to see comrade Senzo and Sihle holding hands. What more could you ask for‚" said Ramaphosa.

He urged the party's rank and file to support the new ANC leadership‚ fight corruption in its ranks and "to not soil the reputation" of the ANC.

Ramaphosa stressed that the ANC needed a strong KwaZulu-Natal as it was the home of outstanding legends.

"I'm humbled to be standing in this hallowed place...on the shoulders of giants‚" he said.

The top six officials will on Tuesday move to the Eastern Cape where they will lay wreaths at the graves of former ANC presidents AB Xuma and Nelson Mandela.