An armed security officer has been charged with murder following the fatal shooting of a 43-year-old man accused of stealing a tractor near Krugersdorp over the weekend.

According to the Krugersdorp News‚ quoting Tarlton police spokesperson Lucky Matome‚ the man‚ believed to be a farm worker‚ was driving the tractor from his home in Matshelapad when he was stopped by security officers on Saturday.

Graphic images of the victim‚ who suffered a fatal gunshot to the head‚ have been circulating on social media.

“He had allegedly stolen the tractor he was driving‚” the report quoted Matome as saying.

“The police were summoned to the scene where they found the situation to be tense‚ as the members of the community attacked the security officers‚” he said.

“The vehicle belonging to the security officers was badly damaged‚ but the officers escaped unharmed.”

Another photograph also shows what appears to be the suspected security guard standing in front of the tractor on which the deceased victim is still sitting.

In the background‚ a small crowd is gathered.

The 46-year-old security officer was arrested and made his first appearance in the Krugersdorp Magistrate’s Court on Monday.

It is not clear at this stage what the outcome of this court appearance was.

A Facebook post in which the two photos were posted has been shared more than 8‚000 times‚ and claims the shooter to be a farmer and that the driver had taken the tractor to buy lunch when he was accosted and murdered. 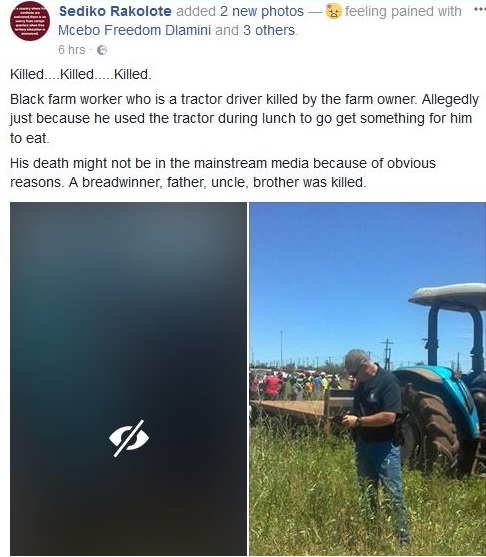