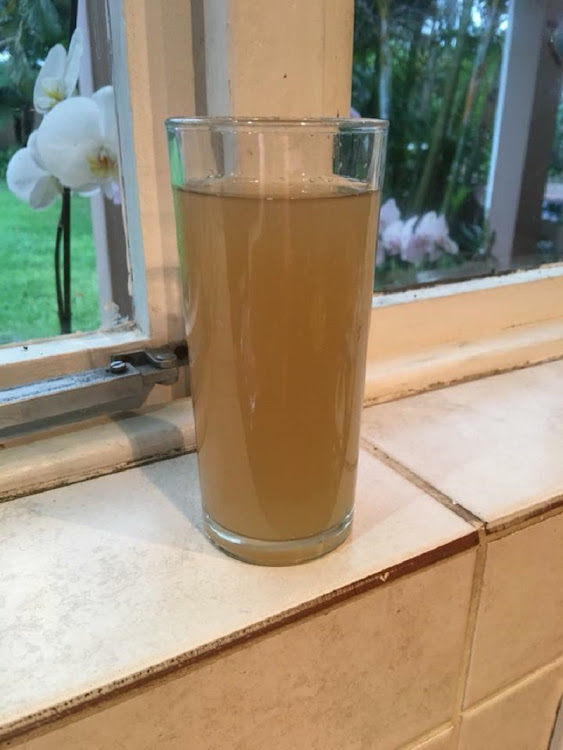 An Ugu resident posted this picture on Facebook, saying: "My water in Oslo Beach, my toilet bowls stained, I have to buy bottled water to brush my teeth as well as cook and wash and prep my food."
Image: FACEBOOK

Threats of legal action by the Ugu municipality on the KwaZulu-Natal south coast in response to a social media post on “dirty tap water” backfired when residents produced photographs of muddy tap water on Thursday.

The municipality expressed "concern and dissatisfaction" after a photograph of muddy water coming out of a bathroom tap went viral on social media on Wednesday.

The municipality said when they contacted the person who posted the picture on Facebook‚ they discovered that it was a slanderous post.

"She could not give details of where this area is but instead told the municipality that she also found the photo on Facebook and wrote Ugu water on the picture and circulated it on different community groups‚" the municipality said in the statement.

It maintained that while the district continued to experience water woes‚ it was "certain that no area during this period has been provided with such water".

But disgruntled residents - many of whom had no water for days over the festive period - accused the municipality of lying about the quality of the water.

On Ugu Complaints‚ a Facebook page where disgruntled residents share their frustrations‚ residents posted pictures of muddy water coming out of their taps.

One resident from Oslo Beach said her toilet bowls were stained and she had to buy bottled water to brush her teeth and cook.

Another said his clothing was stained as a result while others provided dates and areas of when "chocolate coloured water" came out of their taps.

Meanwhile at least 6‚000 people have submitted affidavits and signed a petition to criminally charge and sue the municipality and its staff for alleged sabotage and vandalism of water services and infrastructure last year.

The mayor of Harare says a shortage of chemicals has resulted in unsafe water being pumped into residents’ homes for consumption in the Zimbabwean ...
News
4 years ago

The municipality said it had received death threats against repairmen sent to fix the damage. The sabotage was blamed on water and sanitation workers in the municipality who had been on an unprotected strike.

The KwaZulu-Natal government accused workers of “deliberately damaging the infrastructure” and at the time Weziwe Thusi‚ the acting MEC for co-operative governance‚ said the sabotage was “wrong and illegal” and must stop.

She said that the water supply would return “to normal with immediate effect” and that an agreement had been reached with the strikers.