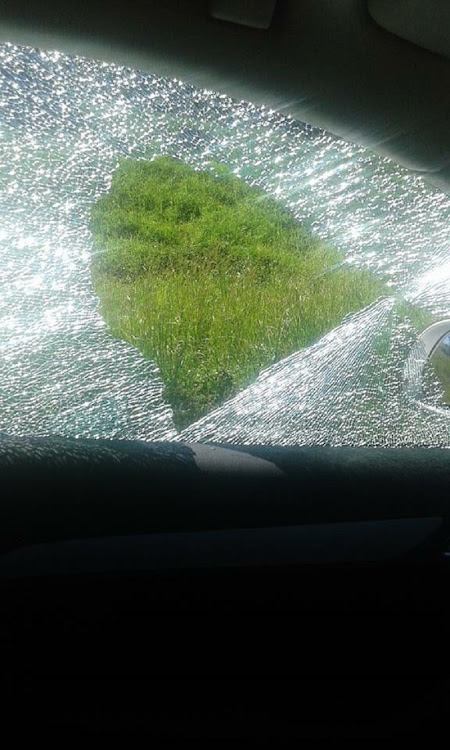 Ballito woman Alicia Cilliers was petrified when a group of men threw a rock which shattered her windscreen. Despite her fright, she kept on driving
Image: SUPPLIED

A Ballito woman has survived a rock throwing incident‚ one of several in the wake of an attack which claimed the lives of two siblings last week.

Alicia Cilliers‚ of Westbrook‚ was travelling on the N2 when a group of men pelted her car with rocks on Thursday morning.

One of the missiles‚ which she maintains was aimed at her windshield‚ smashed her passenger window. She was alone at the time.

“I had just joined the N2 and I was driving toward Durban when I noticed a group of guys standing in the bushes on the side of the road.

“And they just threw a rock through my passenger window and it exploded. I got such a fright‚” Cilliers said. “I think they were aiming for my windscreen to get me to stop my car. I am so glad I just carried on driving‚” she said.

Cilliers added that a December 27 rock attack on the KZN north coast‚ which left siblings Amina and Abdur Rahim Haffejee dead‚ had been fresh in her mind.

“We live right there and our community is so stressed about these rock-throwing attacks. Yesterday there were two other incidents on the M4 but also in the Westbrook‚” she said.

A reward of more than R250‚000 has been offered for information leading to the arrest of those responsible for the murder of the siblings.

They were travelling from Umhlanga to Stanger when the rock tore into their car on December 27.

The rock ripped through the windshield and hit Amina - the force of impact causing her seat to fly back and hit her brother.

Her distraught husband then drove with their bodies to the nearest hospital they could find.
News
4 years ago
Next Article