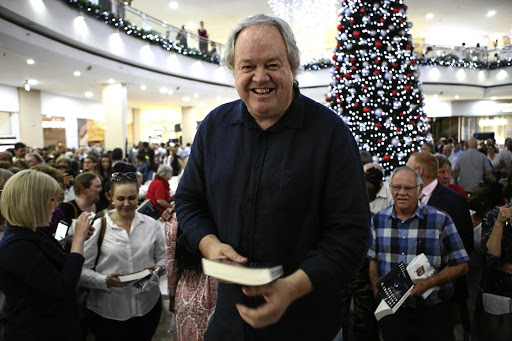 The author of 'The President's Keepers', Jacques Pauw, at the book's launch in Brooklyn, Pretoria.
Image: PHILL MAGAKOE

Books are back. That’s the verdict of retailers after a year that saw rising sales driven by real-life political drama.

Whether it was an exposé of the allegedly dodgy tax records of Number One‚ gaffes from a television personality or details of Nelson Mandela’s final months alive‚ South Africans were treated to a smorgasbord of literary offerings in 2017.

Book shops said they had seen a spike in sales which could point towards more people reading books than they have for a while.

Investigative journalist Jacques Pauw’s The President’s Keepers topped the list of books that caught the country’s attention – and even triggered a lawsuit by the South African Revenue Service and an investigation by the Hawks.

Zuma's bruising year in the courts

It has been a turbulent year in courts for President Jacob Zuma.
News
4 years ago

So far‚ the book has sold 114‚000 copies in digital and print‚ and Exclusive Books CEO Benjamin Trisk said the chain sold more than 50‚000 copies in the first month after its publication in October.

Trisk said the interest might have been heightened by DA leader Mmusi Maimane’s use of the book to question Zuma in parliament and the threat by the State Security Agency to pull it from the shelves.

“The first three days we sold about 1‚500 copies‚ which was fair for any new book‚ but by day five all our book stores had run out of the 10‚000 copies we had initially purchased‚” said Trisk.

Like other book stores‚ takealot.com said The President’s Keepers was their hit of the year. It was followed by Enemy of the People by Adriaan Basson‚ the 40th anniversary edition of Steve Biko’s I Write What I Like‚ Western Cape premier Helen Zille’s Not Without a Fight and DA MP Glynnis Breytenbach’s Rule By Law.

Red Notice by Bill Browder and Khwezi by Redi Tlhabi were also among the top sellers.

Takealot chief marketing officer Julie-Anne Walsh said the online retailer sold more than 750‚000 print books in 2017. “This year we have seen a massive growth in the interest of current affairs and political-related books‚” she said.

“With tensions mounting in the political sphere‚ books written about President Jacob Zuma and about South Africa’s political and social situation in general are getting a lot of interest from our customers.”

But the attraction wasn’t only political. Books also got a bump in 2017 thanks to controversy when two titles — by television personality Bonang Matheba and former surgeon-general of the South African Defence Force Vejay Ramlakan — were pulled from the shelves.

Pauw to oppose SARS application that he contravened tax laws

Pauw says he will oppose an application by SARS in the Western Cape High Court over his recently published book.
News
4 years ago

It claimed Winnie Madikizela-Mandela — not Graça Machel — was at Mandela’s bedside when he died‚ and gave details of the day Mandela stopped breathing at his Houghton home six months before his death on December 5‚ 2013.

These and other previously undisclosed details — including an account of how an ambulance transporting a gravely ill Mandela to hospital caught alight — prompted a furious Machel to threaten Ramlakan with legal action.

Although Ramlakan told the Sunday Times at the time that he had the family’s blessing‚ Machel said she had taken issue with the book because it breached doctor-patient confidentiality. She said the work was “an assault on the trust and dignity of my late husband”.

Matheba’s memoir‚ Bonang From A to B‚ was pulled by BlackBird Books in August after a storm of criticism over its grammatical and factual errors.

Uncomfortable reading for some

Unsurprisingly, Van Vuuren's book is not a runaway success as it does not fit in with the view that corruption only emerged post-1994.
Opinion
4 years ago

BlackBird Books’ Thabiso Mahlape took responsibility‚ saying: “The last thing I want is for black people to be accused of mediocrity... I ought to have done better.”

At the same time Bonang’s former best friend‚ Somizi Mhlongo‚ and her ex-boyfriend demanded that their names and any references to them be removed from the book. A new edition was launched in September‚ without Somizi‚ DJ Euphonik and poor grammar.

Veronica Napier‚ senior publicist at Pan Macmillan‚ said there was a gap in local publishing that should be explored. “Local audience currently read overseas titles on health and fitness‚ inspirational books and business books‚” she said.