ANC to meet with lawyers over 'missing' votes 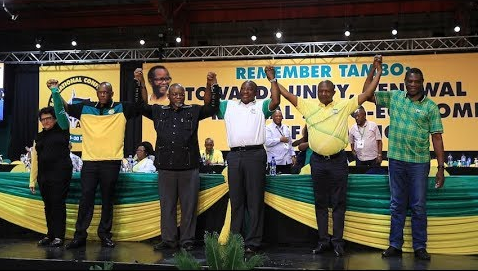 New ANC top six announced #ANC54 The ANC's new top six leaders have been named at the party's elective conference in Nasrec, Johannesburg. Cyril Ramaphosa was named the new president of the party.

ANC representatives are on Friday scheduled to meet with lawyers who are trying to resolve the issue of the 68 “missing voters” from the national conference.

“Yes‚ we will be meeting today. It’s going to be the branches who are complaining and the ANC‚” ANC spokesperson Zizi Kodwa said.

The meeting is to be held at Luthuli House on Friday afternoon.

#ANC54 Dexter Selepe from Selepe Seleke Attorney confirms a meeting with ANC representatives over the issue of the 68 ballots counted as 'special votes' during the ANC National Conference in Nasrec.

Selepe is representing a group of ANC delegates from Limpopo‚ who form part of the 68 missing votes contingent.

On Wednesday‚ newly elected ANC president Cyril Ramaphosa called on delegates to “protect the integrity” of the ruling party’s 54th national conference and not to let it “degenerate into controversy and huge legal suits that will nullify the result” of the election of the party’s top six. His appeal was contained in a leaked video sent to journalists attending the conference in Nasrec‚ where he addressed delegates.

The missing votes concern the election of ANC secretary general Ace Magashule. Supporters of his rival‚ Senzo Mchunu‚ an ally of Ramaphosa’s‚ raised concerns that Magashule’s election was irregular. Magashule beat Mchunu by 24 votes in the contest for the position of secretary general.

Mchunu supporters cited an irregular second count and then there was the issue of 68 ballots that went missing during the election of the top six leadership positions.

The bulk of the missing votes came from delegates said to be from Mchunu-allied branches‚ increasing speculation that these votes could easily overturn the 24-vote difference that separated the two candidates.

ANC has given government until June 2019 to complete the migration from analogue to digital broadcast technology.
News
4 years ago

The ANC elective conference has called on government to “speedily” implement the decision to provide free higher education.
News
4 years ago

The steering committee of the ANC national conference is having an urgent meeting amid concerns over vote counting.
News
4 years ago

Political analyst Ralph Mathekga on Monday said the newly elected top six of the ANC was trouble waiting to happen.
News
4 years ago
Next Article