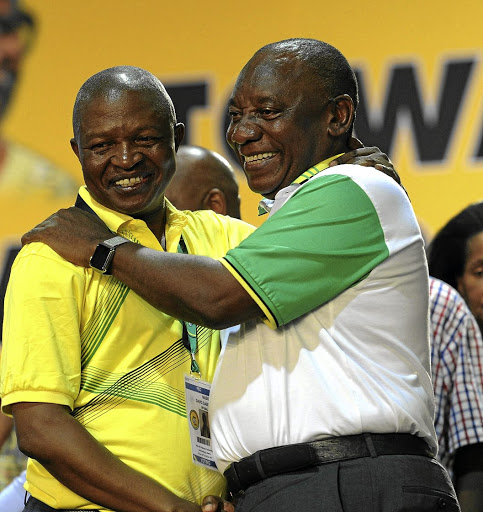 Mabuza did not enforce that delegates from his home province of Mpumalanga should vote for Dlamini-Zuma despite him appearing on her slate as deputy president.

Delegates from Mpumalanga confirmed that shortly before they cast their vote on Sunday night, a number of the 708 delegates gathered.

Sources said that at the gathering, Mabuza's told delegates to "vote with their conscience" and did not "decisively enforce NDZ on his supporters".

Delegates who supported his "unity" deal asked for direction on who to vote for president, but Mabuza did not mention the name of Dlamini-Zuma.

DD told delegates to go with their hearts.

"What was implied is that delegates must go with their heart," a provincial leader said.

Mabuza had been coy about which way he would swing the vote at the elective conference of the ANC, opting to support "unity" in the run-up to the conference.

But, by the time the conference started on Saturday, lobbyists for Dlamini-Zuma were confident that the votes from Mpumalanga, which is the second-biggest voting bloc in the ANC after KwaZulu-Natal, were in the bag.

"We relied on DD (Mabuza's nickname) and he betrayed us," a Dlamini-Zuma lobbyist said shortly after the results were announced.

A cabinet minister, who spoke on condition of anonymity, expressed a similar sentiment in a text message, saying Mabuza "sold us out".

A third ANC provincial leader also said that "DD will regret this unfortunately".

Lobbyists for Dlamini-Zuma expected Mabuza to back her and ensure his supporters toed the line. Mabuza won the deputy presidency of the ANC with a lead of 379 votes over his opponent Lindiwe Sisulu.

Magashule, Mabuza represent ‘opposite of where ANC needs to go’: analyst

Political analyst Mcebisi Ndletyana has slammed the election of Ace Magashule as the new secretary-general of the ANC.
News
4 years ago

Outgoing ANC treasurer general Zweli Mkhize turned down nomination for the position of party deputy president after striking a deal with Mpumalanga ...
News
4 years ago

Cyril Ramaphosa has been voted as the new president of the African National Congress (ANC). Other members of the ANC top 6: David Mabuza won the ...
News
4 years ago
Next Article