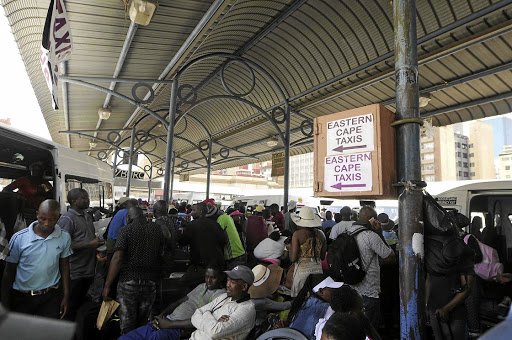 The Wanderers taxi rank is busy as people working in Gauteng travel home to Limpopo and Eastern Cape and countries such as Botswana and Zimbabwe during the festive season. / Thulani Mbele

Steven Moyo usually pays R400 to travel from Johannesburg to Zimbabwe where he connects to his home country of Tanzania, but the price has increased by more than 100%.

Moyo, 41, is among thousands of passengers forced to pay inflated fares during the festive season. He bought his bus ticket at Park Station and paid R850 for a trip to Harare en route home.

"I booked my ticket yesterday [Sunday]. Today people paid R900, the closer we get to Christmas the higher the price. I am going to Tanzania, for two to three days," he said.

"Bonus is for us all. On my side, I don't get [a] bonus, but you do so we must find a way to share it. When the demand is high the prices also go up," he joked.

He said they had seen a high level of movement since December 1. "We load three buses a day. We normally get busy from the 15th to the 24th, but this year people started moving early. I think people are eager to see the new Zimbabwe, though nothing has actual changed."

Mzwandile Nyila ferries customers in his taxi from Park Station to the Eastern Cape daily.

He said although the trip is tiring, it gives him joy to take people to see their loved ones.

"Sometimes we are forced to take people who do not have money because they were robbed of their salary," he said.

Rowen Thulelo, a passenger in Nyila's taxi, last visited her family last December. She works as a domestic worker.

"I normally pay R450 to go home, but today I paid R500. Transport is expensive this time, but we do not have a choice," Thulelo said.

Johnny Setsiba, a queue marshal for Johannesburg-Polokwane taxis, said the prices only increased for the December and January rush.

"We only increase by R10. It now costs R250 to travel to Tzaneen and R240 to Polokwane. It is more expensive to maintain the cars during this time, everything is expensive."