Zuma antics and all, 2017 has indeed been an annus horribilis 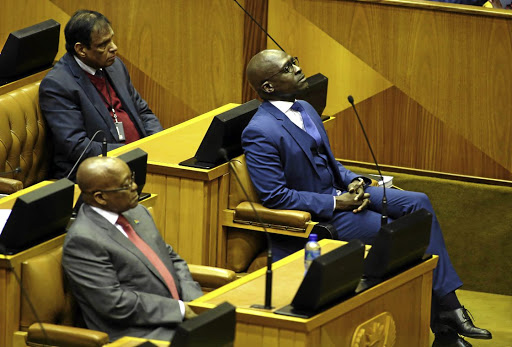 2017 was a year of political madness. Never since the birth of our democracy had our country been subjected to the kind of chaos that we witnessed this year.

It is true that the removal of Thabo Mbeki from the Union Buildings in 2008 was dramatic, but it did not destabilise South Africa the way 2017 did.

The madness began early in the year with transparent attempts by the Guptas to capture our country's fiscus.

Jacob Zuma knew at the time that he was already an untrusted president. He waited for us to sleep before issuing statements at night, denying that he and the Guptas were trying to remove Pravin Gordhan from Treasury.

Criminals don't stop until they get what they want. As if holding a gun to our nation's head, Zuma brazenly fired Gordhan, replacing him with a known Gupta agent - Malusi Gigaba.

This poured a torrent of water on the embers of a country whose economy was too weak to lift its head above 1%.

A few months later, Statistics South Africa informed us that unemployment had reached the highest level last witnessed 13 years back. More than 9 million South Africans are now without jobs. More than half of our young people wake up every day and do nothing.

Statistics also revealed that more that 50% of black South Africans live in poverty. Even those receiving social grants are heartbroken to see their meagre income failing to fill a basket of grocery at their nearest supermarket.

The honest public servants working for government were as despondent as their counterparts working for state-owned enterprises like Eskom, the SABC, SAA, and so on.

The looting and arrogance of top bosses in these companies is as breath-taking as the failure of the ANC to remove Zuma is exasperating.

At some point we all felt a sense of collective rebarbarisation. It was like a reverse evolution from modern man to the primitive age of Neanderthals.

Outgoing ANC treasurer general Zweli Mkhize turned down nomination for the position of party deputy president after striking a deal with Mpumalanga ...
News
4 years ago

The madness was not confined to our shores. American and Russian guns continued senselessly to claim more lives in Syria. North Korea ratcheted up its long-range rocket tests. All of a sudden, Donald Trump decided to donate Jerusalem to Israel like a Christmas gift, just as the army donated Emmerson Mnangagwa to the hope-starved people of Zimbabwe.

Vladimir Putin got his Christmas gift in the form of a historic nuclear deal in Egypt. Who would have imagined Egypt being snatched from America into the stinky armpit of Russia?

Here at home, 2017 scandals kept on creeping into the public domain like "smallernyana" skeletons stampeding out of Bathabile Dlamini's closet.

The soul of our nation was poisoned. Jimmy Manyi and Andile Mngxitama were in their element, smelling every little conspiracy from the factories of white monopoly capital.

In this drama not even the sacred was spared. Nelson Mandela was deprecated as a sell-out.

When the Gupta Leaks finally came out companies such as KPMG, McKinsey and Multichoice stood naked like a priest caught in the bedroom of his neighbour.

A few weeks before Christmas, Steinhoff confirmed the private sector is as corrupt as the state.

The pseudo-angels of the market were exposed. A picture portrays corruption as the exclusive domain of black people in government.

Judge Dunstan Mlambo of the North Gauteng High Court delivered three judgments to go down in history as the longest middle finger to the head of state. Mlambo's judgments were followed by others in KwaZulu-Natal, Free State and North West.

It was ANC comrade versus ANC comrade in court, seeking to prevent each other from attending the party's elective conference.

The gist of Jacob Zuma's political harangue is that he leaves behind a party that is stronger. This lie is believed only by the simpletons who will buy the propaganda of unity that will come from the party's new leadership.