Hannah Cornelius murder: Girlfriends of accused stand by their men 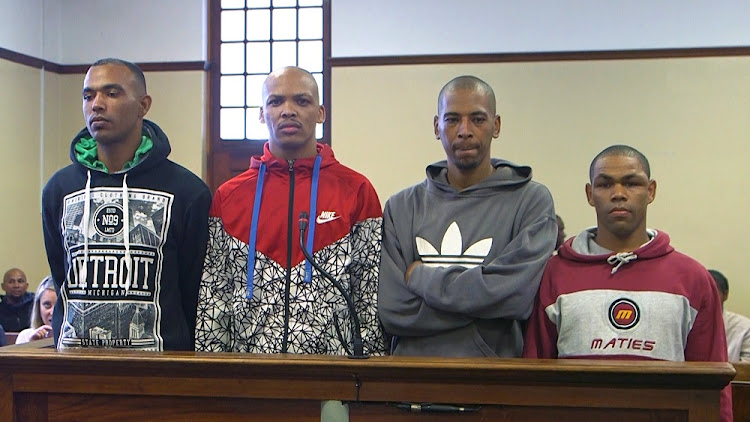 The four men accused of the rape and murder of Stellenbosch student Hannah Cornelius seemed more concerned about wooing their lovers than the ten charges they face.

Geraldo Parsons smiled and blew kisses at his girlfriend after he heard that the case was postponed‚ yet again‚ to January 25.

He was standing in the dock at the Stellenbosch Magistrate’s Court along with his co-accused - Vernon Witbooi‚ Eben van Niekerk‚ and Nashville Julius.

Dressed in hoodies and shackled with rusty prison chains‚ the men seemed more at ease than the heavily armed police observing the proceedings.

They have been accused of raping and murdering the 21-year-old after they hijacked and kidnapped her and her friend‚ Cheslin Marsh‚ in the early hours of May 27.

Marsh was stabbed and struck with a brick but managed to find help after he was left for dead in Kraaifontein - 15 km west of Stellenbosch. Cornelius' head was crushed by a large rock after she was stabbed several times.

The accused are thought to have played different roles in the crimes.

According to the charge sheet, the nightmare started in the early hours of May 27.
News
4 years ago

They are also accused of attacking two other women later that morning using the murdered Cornelius' blue Citi Golf.

Parsons‚ Witbooi‚ and Van Niekerk - dressed in a Maties hoodie - seemed defiant as the media were allowed to take pictures of them for the first time. During previous court appearances the girlfriends often sat together and exchanged smiles with their men.

On Wednesday Parson's girlfriend‚ who asked not to be named‚ said she was not happy that he showed little affection in court.

"He didn't blow me a kiss. I think he has another girlfriend‚" she said in jest.

She and "her man" have an eight-year-old daughter‚ who will be getting a Barbie doll for Christmas‚ and an 11-old-son who likes playing with cars.

"We lost our twins earlier this year. I had to go for an operation‚" she said.

"I would get a stroke if he pleads guilty‚" said the woman.

They even have matching tattoos behind their left ears - a coincidence she claims.

As the men were herded back into the prison truck‚ along with a prisoner who previously easily managed to break his shackles and flee‚ they were met by girlfriends and family.

Parsons gave his girlfriend a toothless smile and asked "his liefie" to bring him shoes the next time she visited.

As the truck left he shouted her name with his face pressed against the grid iron window. "I love you Geraldo!" she screamed.