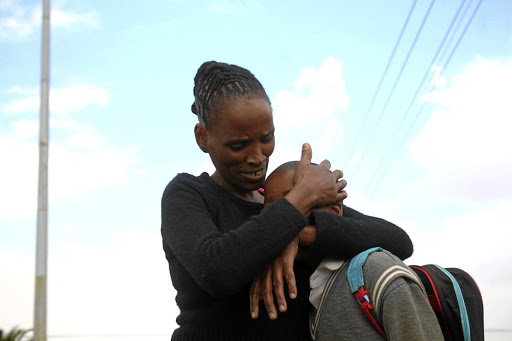 Debrah Ndongwana embraces her son Mandla, who was allegedly assaulted by a deputy principal. / KABELO MOKOENA

An Atteridgeville, west of Pretoria, mother whose son was allegedly assaulted by a deputy principal at school has claimed she was offered R12000 to keep her silence.

Debrah Ndongwana's 10-year-old epileptic son lost his tooth in May at Zodwa Special School in Atteridgeville after allegedly being punched by the school's deputy principal.

Ndongwana, 43, claimed the principal called her last week to make unsolicited cash payment under the guise it was to assist with her son's injuries.

But the incensed mother rejected the principal's offer because she saw it as "bribery" to let the perpetrator off the hook.

"I was happy when I got a call from her (the school's principal) about my son. Little did I know that she was going to make an insulting offer.

"This is not about money, I want justice for my son. The deputy principal should face jail for what he did to my son.

"The principal said on Tuesday that the internal probe has been completed and the deputy principal was found guilty and fined R12000.

"The principal refused to hand over the print-out of the findings. I have never received any apology from the school or department about my son's injuries," she said.

The principal did not respond to Sowetan's requests for a comment.

Ndongwana has laid assault charge against the deputy principal.

Police spokesman Captain Kay Makhubele confirmed that the case was being investigated.

In May, Ndongwana was told her son had been injured after he fell on his mouth and lost a tooth.

However, her son said the deputy principal had punched him.

An Atteridgeville, Tshwane, mother has laid charges of assault against a deputy principal who allegedly punched her epileptic 10-year-old son in the ...
News
4 years ago

Ndongwana said the man allegedly accused her son of making noise in class.

Ndongwana said she confronted the alleged perpetrator who admitted to punching her son in front of the principal.

Spokesman for the Gauteng department of education Steve Mabona said the department was disappointed by the sanction meted out by the disciplinary committee.

"The disciplinary committee concluded the investigation and found the perpetrator guilty and fined him R12000 to be paid to the department," he said.

"It must be mentioned that the head of the department has commenced with a process to appeal this inappropriate sanction."