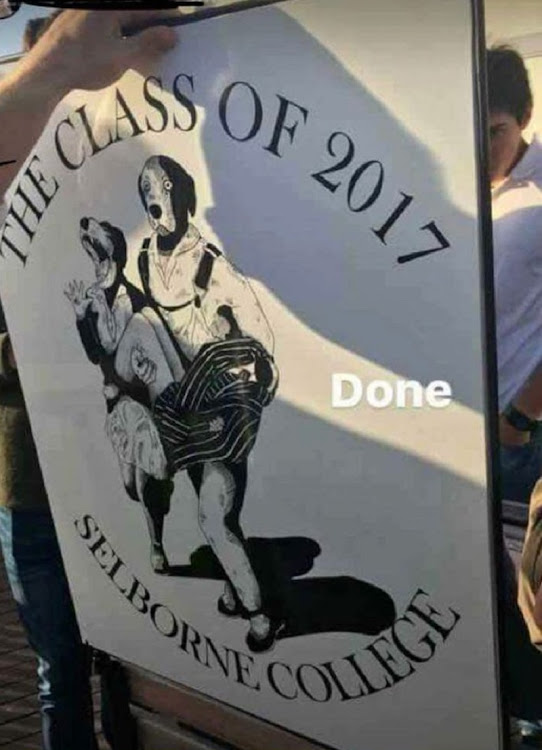 The artist who created the controversial Selborne College class of 2017 poster has apologised for “any misunderstanding caused by the artwork”‚ saying it was never meant to reflect any racism or prejudice.

The school governing body at Selborne College issued a statement on Sunday morning giving the artist’s explanation behind the poster that sparked outrage on social media.

The poster shows two human-like dogs‚ one a male carrying a faceless figure and the other a gasping female who appears to be running alongside them.

The words “Class of 2017 Selborne College” are written on it.

The poster‚ apparently used in an invitation to an event to celebrate the end of school career of the class of 2017‚ was allegedly created by a pupil.

The image was shared on social media on Friday‚ with Facebook users saying it was a spoof of the photograph of a dying Hector Pieterson being carried by Mbuyisa Makhubo with his sister‚ Antoinette Sithole‚ running beside them.

According to the SGB’s statement‚ the artist‚ who is not named‚ said he was inspired by an iconic image that he saw in history text books.

Selborne distances itself from controversial portrait

Selborne College has distanced itself from a controversial portrait that has caused outrage and confusion on social media.
News
4 years ago

“I was commissioned to do an artwork that expressed loss‚ grief or sadness that the matrics at the time could relate to.”

The artist‚ allegedly a pupil of the 2017 matric class‚ said his intention was to adapt the photo into a Selborne-based artwork.

“The two dogs have been adapted into dogs as symbolism to our school. Selborne is often referred [to] by its official symbol of a Greyhound or Whippet dog and was no way meant to be derogatory or disrespectful to any person.”

“I wanted an artwork to represent (our) emotional feelings at the time of leaving the school‚ only for Selborne matrics of 2017. I viewed the iconic image as a powerful symbol of loss‚ that then brought forth better futures (historically speaking)‚ and thought it was a good relatable image for our class and its success to come.”