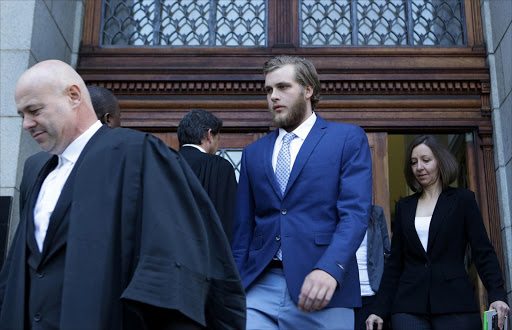 The gripping trial of Henri van Breda‚ accused of hacking his brother and parents to death‚ has finally exhausted its well of witnesses on both sides.

For those who have sat in court for all of the 63 days‚ it has played like an unedited film – lurching from a gripping drama that keeps you on the edge of your seat on the one day‚ to the endless detail in the fine print of textbooks on the next.

The main character is a young man who had the world at his feet and turned only 23 in the dock. Without fail he wore the mask of somebody whose internal world sends very little to the surface for scrutiny.

Whichever way the tide turns‚ his will be a history of a dead brother‚ dead parents‚ a sister with retrograde amnesia who was also savagely attacked‚ and a few moments in which everything changed.

Dr James Butler‚ a neurologist says that Henri Van Breda has a form of epilepsy.
News
3 years ago

Those very moments were re-enacted in the Cape High Court with a replica of the axe and a knife‚ which are likely to remain imprinted on the minds of those who had followed the trial.

All of a sudden‚ the spectacle of a heinous crime moved from the dark corners of the human imagination‚ and into the courtroom itself.

There was Van Breda‚ axe in hand raised above the imaginary head of his sleeping older brother and then his frantic father who had come in to help.

He was‚ of course‚ starring in the role of the alleged attacker – said to be full of mirth and donning a handmade balaclava as he bore down on them with the lethal object – but still‚ the visceral nature of that night was not lost on those witnessing it.

Next came the re-enactment of his alleged confrontation with the said attacker. Here‚ it was the smooth choreography that had those in the public gallery leaning forward as if one beast.

With a court official cast in the role of the attacker‚ Van Breda could direct him within a millimetre of the story he was telling. The replicas‚ made of pale wood‚ gave a certain flimsiness to the scene‚ lacking the full-weight metal of the objects found at the bloody family home.

Van Breda spends weekend in hospital; is diagnosed with epilepsy

Henri van Breda‚ who stands accused of axing his parents and brother to death‚ spent the weekend in hospital.
News
3 years ago

For state prosecutor Susan Galloway‚ it was not merely the fake axe and knife that lacked gravitas‚ but the details of the story being presented too. Along with trained medical experts‚ she argued that those same wounds he claims were inflicted upon him by the attacker were actually the result of his own cold deliberation to defeat the ends of justice.

Even with embarrassing imagery laid bare (Van Breda cutting superficial parallel lines into his own chest and arms with a knife from the family kitchen) he listened in court with a blank face.

It was only on one particular day that Van Breda bore all the confidence of his former life as a trust fund kid‚ globe trotting with his parents and siblings‚ stitching weekends together with sumptuous braais and bouts of summer surfing.

He tapped Botha on the shoulder. Botha‚ in turn‚ asked Judge Siraj Desai to excuse his back.

Twenty seconds later‚ Van Breda’s entire team – having asked for two minutes to speak outside – left the courtroom‚ heading out of a side door into the quaintly tiled passage of the halls of justice.

Almost 60 days in‚ the triple axe murder trial of Henri van Breda has taken many twists and turns.
News
3 years ago

On their return‚ Botha announced to Judge Desai: “My lord‚ my client is objecting to the way you are speaking to the witness.”

Said witness was Dr Antonel Olckers‚ a private DNA expert who came across as part librarian with a rubber stamp‚ part hired gun.

Speaking with endless monotony on the state forensic laboratory whom she claimed had not followed every protocol‚ Olckers had indeed raised the ire of Judge Desai with her repetitive answers‚ stock responses and failure to answer the main question at hand: were the results of the laboratory tests (which were very damning for Henri) not to be trusted?

Galloway‚ too‚ had asked if she could definitively state the samples were contaminated. Likewise‚ Judge Desai asked her to indicate the likelihood that the tests were wrong.

She would simply say that she could not calculate the likelihood‚ and would repeat that not every single Standard Operating Procedure contained in hundreds upon hundreds of pages was followed. A clearly frustrated Judge Desai then said: “I am not asking you to calculate anything. I am asking for your expert opinion!”

Galloway’s final salvo here was the fact that Olckers’s testimony in two previous judgments had been questioned. The words of one judge in particular echoed through the court room: her “paucity of practical laboratory experience and statistical knowledge” had been noted.

Up until then‚ Henri had appeared rather pleased during Olckers’s testimony‚ as if it was wiping clean the slate put forward by the forensic laboratory.

But for many‚ the incontrovertible secrets held in droplets of blood spattered across surfaces and clothing brought to mind a day much earlier in the trial when a large screen was brought into court.

It was placed just in front of the press gallery‚ but facing away from it. The footage of what the first responders from the police had captured was about to be shown. In short: the crime scene. In reality: dead bodies strewn across the bloody stairwell and upper landing of the luxury estate home in Stellenbosch in the Western Cape.

The judge cleared the gallery‚ saying the video was not appropriate for public viewing. Everyone else moved to the one side to gaze upon the horror on the screen‚ and for a moment‚ it felt as if the room had tilted. The one side was packed‚ the other stood empty – save for Van Breda who now more than ever cut a lonely figure.

Van Breda shaken after re-enacting 'fight for his life'

If Henri van Breda is fabricating a narrative around a phantom attacker, the state prosecutor is not buying it
News
3 years ago

He had asked not to watch the footage as it would be too upsetting‚ but bizarrely was seated right next to the screen facing the “audience”‚ like a sideshow to the main feature.

It was difficult not to stare at his face‚ as he‚ in turn‚ stared at the reactions of the people seeing his parents and brother like bloodied crumpled rag dolls dead on the floor.

Also of note was the final image of the footage: the contents of Van Breda’s bowels in the toilet bowl‚ with no toilet paper. Crass as it may seem‚ this issue did later come up‚ with the defence claiming that his failure to wipe himself clean gave credence to his story that he was on the loo when he heard something happening in the adjacent room and then saw his brother being hacked to death.

Later‚ it was also his urine that caught that the attention of the defence: in the dying days of the trial‚ neurologist James Butler claimed that the copious amounts of urine on Henri’s shorts bolstered the theory that he had had an epileptic fit‚ which then explained the “missing” two hours and 40 minutes from his version of the story.

That was a time frame in which‚ claimed Butler‚ he lay in an altered state of consciousness on the stairwell after an alleged epileptic fit.

But‚ as Galloway kept pointing out‚ a recent and “fortuitous” diagnosis of Juvenile Myoclonic Epilepsy in no way proved that he had had a seizure on the night of the attack.

Van Breda sticks to his guns - but without a stutter

If Henri van Breda has a stutter‚ it was missing in action on Tuesday.
News
3 years ago

Much of Butler’s testimony‚ she said‚ rested on Van Breda’s own hearsay‚ and even the pants drenched in urine‚ said Judge Desai‚ might have resulted from the sheer trauma of witnessing or committing the family murder.

But more than anything – the endless parade of witnesses‚ the footage‚ the re-enactments in court – it was the robotic spectre of Henri himself in the witness stand giving answers that was likely to give goose bumps to anyone watching.

The only other time his voice had been heard was when the lengthy call to emergency services was played aloud in court much earlier in the trial. All present were struck by his calmness under the circumstances‚ and how not even the slightest hint of panic had crept into his tone or syntax. This‚ the defence would later claim‚ could be explained by the training he had undergone as a boy to overcome a stutter‚ or later still‚ as a result of the delirium he had experienced after the seizure proposed by Butler.

Now‚ standing in the witness box‚ would that same calmness freeze his composure? Would his own discomfort begin to seep through the holes in his story‚ which had been pointed out with such deftness by Galloway?

‘I did not giggle’ – van Breda

Outwardly calm but sweating and controlling his breathing‚ Henri van Breda repeated minute details of his plea statement like a paint-by-numbers ...
News
3 years ago

In a single word‚ his testimony was chilling. Botha had asked for the live-streaming cameras to be turned off‚ claiming that his client would mumble‚ stutter and swallow his words under the stress of knowing he was being filmed.

So‚ when Judge Desai ordered the cameras to keep running‚ all expected the young man to come unhinged‚ or at the very least‚ have a few moments of losing his composure. But none of that came to pass.

Controlled‚ articulate‚ and unflinching‚ Henri’s answers were delivered without a hitch. Even the aforementioned re-enactments were delivered with the sterile motions of the surgeon’s theatre‚ and throughout his testimony‚ the only flashes of warmth came in the form of a cheekiness befitting a school boy. Standing opposite him‚ Galloway was cast as the stolid teacher‚ calling his bluff on unfinished homework for which he had a smart alec answer at every turn.

Now‚ there is nothing more Van Breda can do‚ and come February 12‚ both sides will present their closing arguments. If any journalist‚ judge‚ assessor‚ advocate or member of the public has found parts of the last 63 days excruciating‚ the same must surely go for Henri himself.

He might look back on these days as the twilight of his freedom – or‚ alternatively‚ a whole new beginning.