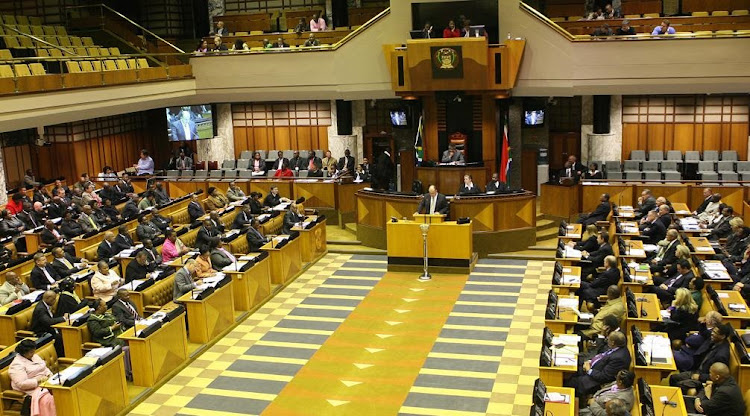 A group of ANC MPs seen as supporters of President Jacob Zuma on Tuesday night failed to disrupt parliament's debate on its duty to investigate state capture.

The ANC backbenchers‚ who included Mervyn Dirks from KwaZulu-Natal‚ Sibusiso Radebe from Mpumalanga and Peace Mabe of Gauteng‚ had earlier threatened to stop the debate from going ahead.

The MPs had argued that the debate‚ which was sponsored by DA Chief Whip John Steenhuisen‚ should not be allowed to continue because parliament was still conducting its inquiry on the matter and it was therefore premature for the House to discuss the matter.

Baleka Mbete has handed a damning affidavit to Jacob Zuma about allegations that a minister had tried to interfere in a state capture inquiry.
News
4 years ago

But their plan fell apart within minutes when the chairperson of the National Assembly‚ Thoko Didiza‚ ruled their argument out of order.

Didiza said their objections were inconsistent with the rules‚ which then forced them to resort to frequently raising points of order in a clear attempt to frustrate the free flow of the debate.

Dirks led the barrage of points of order‚ even referring to Steenhuisen's love life during his time as a KwaZulu-Natal politician several years ago.

"Can the honourable member tell the people of KZN that he left the legislature because he serviced his colleague's wife?" asked Dirks as opposition MPs jeered him.

Steenhuisen hit back: "Oliver Tambo must be turning in his grave when he sees the quality of ANC MPs sitting on these benches‚ that's the best they can come up with. This is a man who can't even pay his municipal rates accounts when he was a deputy mayor."

State capture at Eskom: the story so far

As MPs on Parliament’s public enterprises committee dig into issues of state capture at Eskom‚ stories of corruption and meddling have emerged.
News
4 years ago

Didiza had to read the riot act to Dirks when he threatened to prevent Steenhuisen from delivering his speech if the DA Chief Whip did not withdraw an earlier statement that "a gang of ANC MPs" had threatened to disrupt the debate.

The ANC MPs in Dirk's faction continued with their disruptions‚ which were repeatedly rejected by Didiza throughout more than 90 minutes of debate.

Speaking during the debate‚ respected ANC MP Mondli Gungubele said "it would be strange for the ANC not to say anything" about state capture when it was a thorny issue in the public discourse.

Gungubele said there was a tendency in some sections of society to confuse the oversight role of parliament with the processes carried out by other arms of state‚ such as the judiciary and the executive.

Parliament's inquiry into state capture to invite Guptas to testify

Parliament's inquiry into state capture will invite the Gupta brothers to appear before it.
News
4 years ago

Dirks and his group had earlier on Monday accused their Chief Whip Jackson Mthembu of colluding with the DA on the scheduling of the debate even though this was adopted by the National Assembly's programming committee‚ which was chaired by Deputy Speaker Lechesa Tsenoli.

Mthembu has reported the MPs to the party's bosses at Luthuli House for action.

"The insinuation that the majority party in parliament can direct the opposition what their motions for debate ought to be‚ and vice versa‚ is not only malicious‚ but also very dangerous to the functioning of a healthy multi-party democratic parliament‚" Mthembu said in a statement. "The ANC Chief Whip has escalated the unfortunate and defamatory utterances of these MPs to the ANC."