Uhuru Kenyatta to be sworn-in as Kenyan president 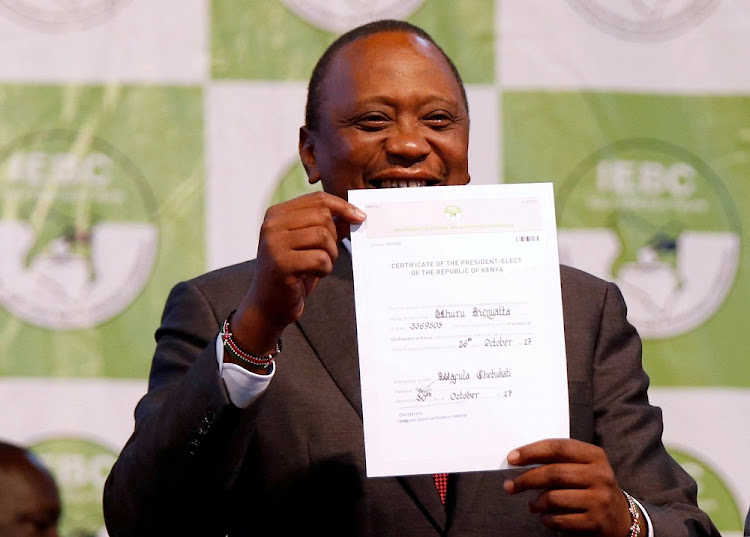 FILE PHOTO: Incumbent President Uhuru Kenyatta holds the certificate of President-Elect of the Republic of Kenya after he was announced winner of the repeat presidential election at the IEBC National Tallying centre at the Bomas of Kenya, in Nairobi October 30, 2017.
Image: REUTERS/Thomas Mukoya/File Photo

Kenya's political divisions looked set to deepen on Tuesday as security forces patrolled the capital in preparation for President Uhuru Kenyatta's inauguration and police sealed off an area where the opposition planned to hold a rally.

Kenyatta won a second five-year term on Oct. 26 in a repeat presidential election boycotted by opposition leader Raila Odinga, who said it would not be free and fair.

The Supreme Court nullified the first presidential election, in August, over irregularities.

The extended election season has divided Kenya, a Western ally in a volatile region, and blunted growth in East Africa's richest economy.

Supporters of Kenyatta - who won with 98 percent of the vote after Odinga's boycott - are urging the opposition to engage in talks and move on.

"Our responsibility after the political competition is to come together and work to build the nation," Kenyatta told a church service on Sunday.

Tens of thousands of Kenyatta’s supporters, clad in the red and yellow Jubilee party colours and carrying Kenyan flags, arrived at the stadium where the inauguration will take place.

“I’m sure Uhuru will be able to bring people together and unite them so we can all work for the country,” said Eunice Jerobon, a trader who travelled overnight from the Rift Valley town of Kapsabet.

Shortly after she spoke, a large crowd gathering outside the stadium overwhelmed police and streamed inside.

Odinga supporters say such talk of unity is tantamount to surrender. They accuse the ruling party of stealing the election, rampant corruption, directing abuse by the security forces and neglecting vast swathes of the country, including Odinga's heartland in the west.

"A return to the political backwardness of our past is more than unacceptable. It is intolerable ... This divide cannot be bridged by dialogue and compromise," Odinga's National Super Alliance opposition alliance said in a statement.

The opposition planned to hold a prayer meeting in the capital on Tuesday, saying it wants to commemorate the lives of Odinga supporters killed during confrontations with the security forces over the election period.

More than 70 people have been killed in political violence this election season, mostly by the police.