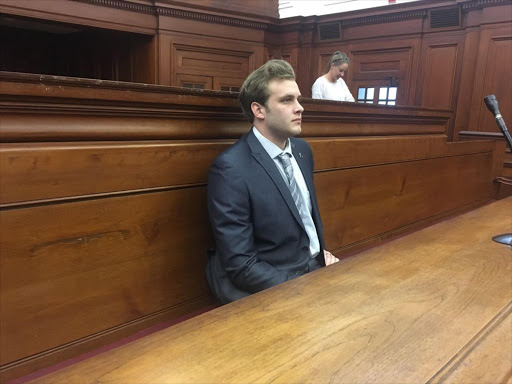 “You are almost usurping my duties in this court‚” a frustrated Judge Siraj Desai told a defence witness in the Henri van Breda triple axe murder trial in the High Court in Cape Town on Tuesday.

Dr James Butler‚ a neurologist from Constantiaberg MediClinic‚ has been testifying since Monday‚ saying the missing 160 minutes in Van Breda’s timeline stem from the fact that he allegedly had an epileptic fit of which he was unaware‚ then had amnesia during which he lay on the stairs.

But Desai‚ who is presiding over Van Breda’s trial for allegedly killing his parents and brother‚ repeatedly questioned whether the evidence on which Butler’s testimony was based could be objectively proven.

He emphasised the fact that it was all based on what the accused himself had told the doctor‚ and not on objective evidence.

Butler said it was “highly likely” Van Breda wet his pants during a spell of amnesia after an epileptic seizure on the stairs‚ and that him being aware of all his injuries but not the bruise above his eye proved that his brain was not working properly because he was recovering from a fit.

He also said the photograph of Van Breda in the ambulance looking “dulled” after the incident was circumstantial evidence that corroborated the theory of a fit — as was the fact that he said he was “lucid” before the alleged bout of amnesia and “disorientated” afterwards.

Dr James Butler‚ a neurologist says that Henri Van Breda has a form of epilepsy.
News
4 years ago

The period after the alleged fit would explain Van Breda’s “lack of urgency and effectiveness” in the “face of the catastrophe” that had just befallen his family‚ said Butler.

But state prosecutor Susan Galloway said the alleged amnesia was based purely on hearsay from the accused‚ that wetting one’s pants could easily happen in a murderous situation‚ and that the expression of the accused in the ambulance could easily be deliberate as he knew pictures were being taken of him.

She also told the court all the information she had gleaned about epileptic fits from the internet‚ and said the accused could easily have done likewise and come up with a description of lucidity then disorientation to make the theory of a fit more plausible.

Galloway also pointed out that a fit leaves no physical scars and it was thus impossible to say this is what happened to Van Breda that night in January 2015.

Under cross-examination‚ Butler said Van Breda did not only suffer amnesia after the alleged fit but was “unconscious” too‚ as referenced by him lying on the stairs for so long.

But when Galloway asked Butler how he knew Van Breda had lain still on the steps for so long‚ Butler replied: “Because he told me.”

She also pointed out that although he had now been diagnosed with juvenile myoclonic epilepsy‚ there was no clinical history of seizures.

“You are not only the first to make the diagnosis but to record the history of any related symptoms‚” said Galloway.