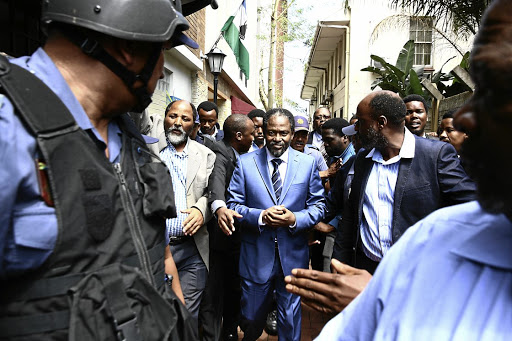 Vela Shembe, centre, who won the court battle for the control of the Nazareth Baptist Church, died at his home on Friday.
Image: THULI DLAMINI

The death on Friday of Vela Shembe - one of the spiritual leaders of the five million-strong Nazareth Baptist Church (also known as Shembe Church) - has thrown the church into a new era of bickering, accusations and counter-accusations.

Vela, also known as "Imisebe yeLanga" (Sun's Rays), died at his home in Durban, reportedly from cancer. Leaders of his faction and family members, however, said yesterday they were still awaiting the postmortem to identify the real cause of death.

At the time of his passing, Vela led the smaller Thembezinhle faction of the divided church.

He was also involved in a court battle with the powerful Ebuhleni faction of the church, led by his nephew, Mduduzi Shembe, also known as "Unyazi lweZulu" (lightning).

The source of this dispute was the death in 2011 of former Ebuhleni faction leader Vimbeni Shembe.

During Vimbeni's funeral, which was attended by more than 1-million worshippers in Ndwedwe, west of Durban, lawyer Zwelabantu Buthelezi produced a will purportedly written and signed by Vimbeni in which he nominated his cousin Vela as his successor.

Also fuelling the dispute was the vast number of assets that Vimbeni presided over, including luxury homes and apartments, vast tracts of land, luxury vehicles and a steady form of income.

The leader of the Thembezinhle faction of the Shembe church died on Thursday night after long battle with cancer.
News
4 years ago

In October 2016, after more than five years of heated arguments and outbreaks of violence inside and outside the Durban High Court, Judge Achmat Jappie ruled in favour of Vela as the legitimate leader.

The Ebuhleni faction lodged an appeal that was still in progress when Vela died.

It is unclear what will happen to the appeal now.

Social media was ablaze with celebrations of Vela's death, before leaders of both factions denounced the lack of ubuntu, chivalry and respect for mourning.

"We are saddened by these visuals and we say they are further dividing the family, which is in the midst of mourning one of their own. People who are wearing Nazareth Baptist Church gear and still celebrate such things are clearly not true believers," he said. "How can they do something like that? We must all learn to follow the true vision of our founding leaders and stop being cold-hearted.

"We must learn to be like political parties like the ANC, IFP and DA who don't brag and insult a rival politician who has died," Mncwabe said.

"Instead (these parties) they send condolences and show a spirit of ubuntu when there is a death."

Nkululeko Mthethwa, spokesman for the Vela's Thembezinhle faction, said the death of their leader has come as a big shock to all of them. "We still cannot believe what has happened. We were not prepared for this. However, we thank God for the time that he (Vela) spent with us," he said.

The family is still meeting to discuss funeral arrangements and will hold a press briefing on Wednesday.