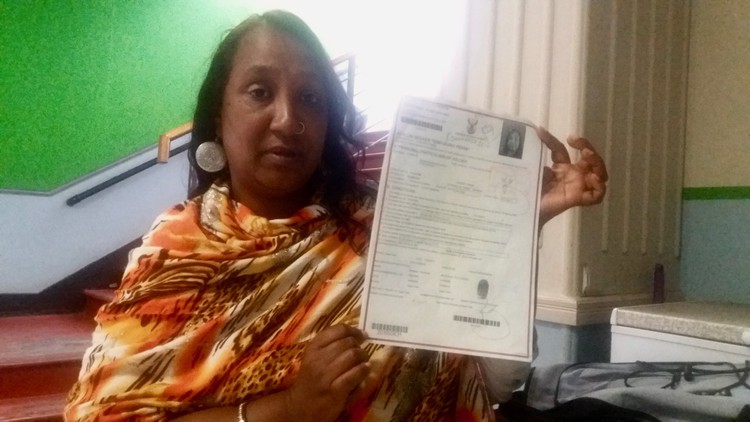 Althea Jacqueline Roberts from Zimbabwe first applied for asylum in South Africa in 2009. Although her papers have been continuously renewed‚ in all these years she has never been given permission to remain in the country for longer than eight months; mostly she gets three-month renewals. On 1 November‚ she was given only one month.

She has had 21 extensions. Each time she has to go in person to the Home Affairs office on the Foreshore‚ Cape Town‚ sometimes queuing for most of the day.

She said it took her five weeks to renew her papers last year. Home Affairs officials said something was wrong with the computer. She lost a lot of time and money continuously returning to check if the computers were back up again.

Her current asylum document states: “To be booked for appeal hearing”. She has been waiting for the appeal hearing for five years.

Roberts‚ who is 48‚ grew up in Bulawayo. She says she ran away from an abusive husband. “He broke my ribs. He also ran me over with a car and threatened me to never tell a soul. The police refused to open a case and embarrassed me. If I had hid in other cities‚ he would have found me easily. That it’s why I escaped with my three children.”

She told GroundUp about many problems her temporary papers have caused. Eight months after Roberts opened a bank account with FNB‚ it was closed. She lost her residential lease in Mowbray and ended up in a shelter. She now lives in a room she shares with a Tanzanian woman in Joe Slovo.

“In Sea Point they laid me off. I had a lovely office job – great salary‚ medical aid and allowances… After I lost my last job‚ I used all the savings and ended up in a shelter again. It’s a horrible pattern‚ being in and out of a job because the [asylum documentation] is unstable. Employers want a valid document.”

To make a living‚ she does any work she can – cleaning toilets‚ doing laundry for other residents. She is sometimes paid only R50 a day.

Her youngest child was studying Public Relations and Management at Cape Peninsula University of Technology. She says she owes the university about R25 000.

Anthony Muteti of Voice of Africans for Change said‚ “There is no justification for such inefficiency. The fact that she has had to wait for about ten years means such an administrative indecision is neither fair nor procedurally correct. This has adversely affected her livelihood and security as well.”

Home Affairs spokesperson David Hlabane said Home Affairs apologises profusely to Roberts. The department is still waiting for feedback from the appeal board‚ he said.