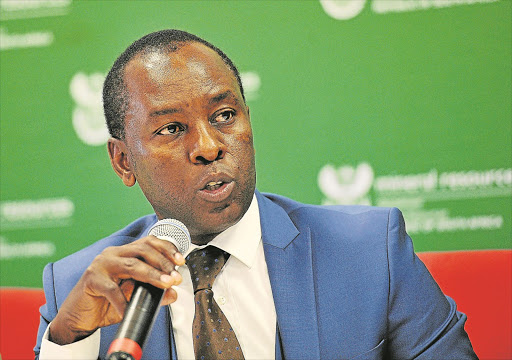 Johannesburg mayor Herman Mashaba says he will be engaging with mineral resources minister Mosebenzi Zwane on how they can work together to avert the serious threat to the city posed by illegal mining.

Mashaba said that together with the members of the mayoral committee responsible for transport‚ Nonhlanhla Makhuba‚ and health and social Development‚ Mpho Phalatse‚ he had inspected sites in the city on Wednesday where rampant vandalism‚ theft of infrastructure and illegal mining remained the order of the day.

“The issues we identified during the visit are multi-pronged in nature and cut across various government departments and institutions‚ as well private sector players. A multi-agency and collaborative approach is therefore a prerequisite to addressing this crises – no single entity or institution can resolve the problem at hand.

“During the visit‚ we witnessed how dangerous illegal mining‚ reportedly taking place in old mine shafts‚ has threatened the safety of community by coming into contact with petroleum pipeline networks owned by Transnet‚” Mashaba said.

He said Transnet Pipelines (TPL) operated and maintained a petroleum pipeline network‚ which was of national interest and strategic importance to the South African economy. The pipeline conveyed petroleum products from various refineries and related facilities to inland consumers. The pipeline network and related infrastructure was geographically across five provinces‚ one of them being in Gauteng‚ in particular within the boundaries of the City of Johannesburg.

“Of significance is the Nasrec precinct where the pipelines intersects with SASOL gaslines. Investigations conducted by the IPU have revealed that if illegal mining activity continues within these old mining shafts‚ the entire FNB Nasrec precinct‚ including the iconic FNB stadium‚ could go down in ruins as a result of unstable earth directly underneath the area. “This is catastrophic considering the precious lives‚ and property in the area‚ notwithstanding the economic impact it would have on the City and indeed the country‚” Mashaba said.

“I have requested that the IPU and all relevant stakeholders formulate a report for the Minister’s consideration with the view of obtaining the necessary support from national government‚” he added.