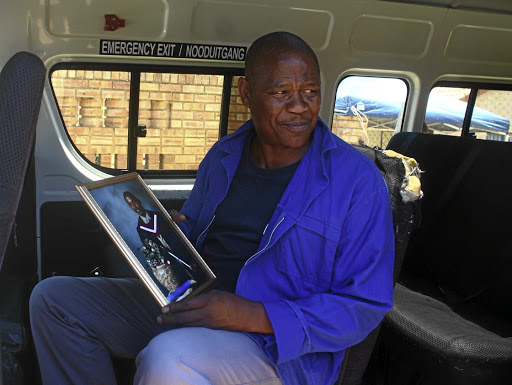 Simon Majola holds a picture of his slain son, Nhlanhla Majola, who was going to testify in a murder case today. / KABELO MOKOENA

A Dobsonville taxi driver was allegedly gunned down in an apparent hit, hours before he was due to testify against his former boss, who stands accused of killing his girlfriend.

Nhlanhla Majola, 35, was killed outside his home yesterday morning.

His father, Simon Majola, told Sowetan yesterday they suspected his son was killed because he was a key witness in a high court matter that involved his former employer, Sifiso Ngobese.

Majola said his son was ambushed by unknown men who opened fire on him.

"I heard two gunshots and heard my son wailing, then a few moments later I heard six more shots before the men got away," Majola said.

He said when the family rushed outside of their house, they found Nhlanhla's lifeless body lying in a pool of blood next to the gate.

Police spokesman Captain Mpande Khoza said Nhlanhla was the second person to be murdered in connection with the case.

East London police are investigating a case of murder‚ after a taxi operator was found shot dead in his taxi in the East London CBD.
News
4 years ago

"The deceased witnessed his boss murder his girlfriend in 2009. The case was taken to court, but the court refused to prosecute due to insufficient evidence.

"The investigating officer recollected the outstanding evidence, and the case was taken back to court," Khoza said.

The accused was convicted and sentenced to 22 years imprisonment for the police officer's murder in September.

The case against him for his girlfriend's murder is still pending.

Khoza said police were investigating a case of murder, but that no arrests have been made.

Simon claimed Nhlanhla's previous lawyer, who was handling the matter, was also killed in a hit.