Stuck in a poverty trap in Piet Plessis 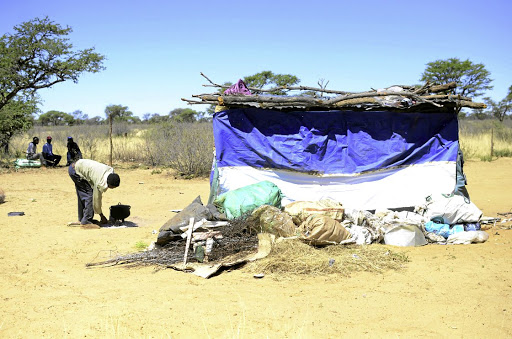 Shack dweller Sueman Mogwase prepares supper for his family who live in a plastic shack structure in Piet Plessis, North West, where poverty levels are the fourth highest in the province.

Even by the standards of rural North West villages, the poverty of the people at Piet Plessis informal settlement outside Stella is many levels deeper.

The day in this dusty and dry settlement begins with local men basking in the sun at street corners.

Many never finished school during their youth, as they left to work at local farms and on other farms many kilometres away.

Stella, 48km north of Vryburg, is essentially a cattle farming town. Lack of expansive crop farming means very few are lucky to get any work on the farms.

The dejected unemployed scrounge around for cash to buy a bottle or two of beer, to drink their sorrows away.

Piet Plessis resembles a refugee camp, with many houses built of straw, tree branches and plastic sheets. It is, in fact, a place of refuge as most residents are people who were forced off farms where they were born and grew up.

Hungry children try to supress their plight by playing games on the stretches of the settlement's sandy ground. 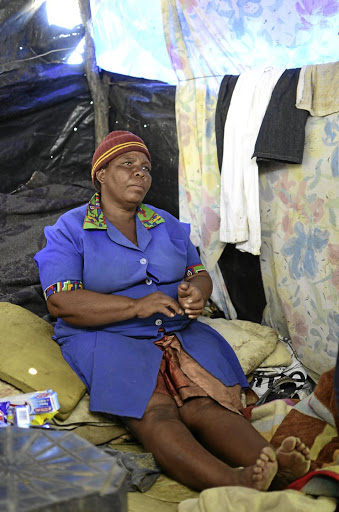 Kebairetse Jane, 48, is one of the 1655 residents. She and her three children live in a one-roomed shack with holes in the plastic sheets.

She never went to school as her parents could not afford to pay for school fees.

"I don't have chairs, please forgive me," she said apologetically as she sat on a mattress and welcomed us to her house.

Her children Karabo, 19, and Selina, 16, dropped out of school, while last born Joeline has never been to school.

"They don't have school clothes so last year they did not return to school," she said.

Jane does not have a toilet and her family travels long distances to fetch water.

Most of the time the family goes to sleep without dinner.

"We are used to hunger and poverty; we have been living like this for a while now," she said. The former domestic worker lost her job when her employer relocated.

She and her three children now live on handouts, with her children having to hustle for something to eat.

Her partner, who didn't want to be named, said of the bag of maize meal they can afford to buy they prefer to cook soft porridge so that the maize meal can last longer.

"We eat it with salt because sugar is expensive," he said.

Their neighbour Kebuele Tlhasedi, 33, lives with her two children, aged 12 and four.

"I only receive the grant for the older one. I can't go and look for a job because I have a disability," she said. 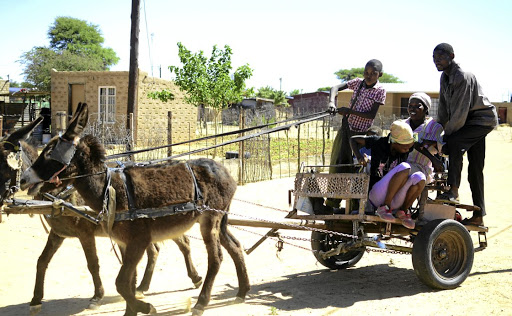 Last month social development MEC Hoffman Galeng visited the area and declared that it had the fourth highest incidence of poverty in the province.

The survey conducted by his department revealed that in 2016 municipalities with the highest poverty head count were Greater Taung at 17%, followed by Ratlou local municipality at 16.9%, and Kagisano Molopo at 14.8%.

"Poverty is more than the absence of food. Our people live in poverty if they do not have access to education, primary healthcare, water land, sanitation and job opportunities," Galeng said. He said he would use some of his budget to buy the children in the area school uniforms and help them start food gardens.