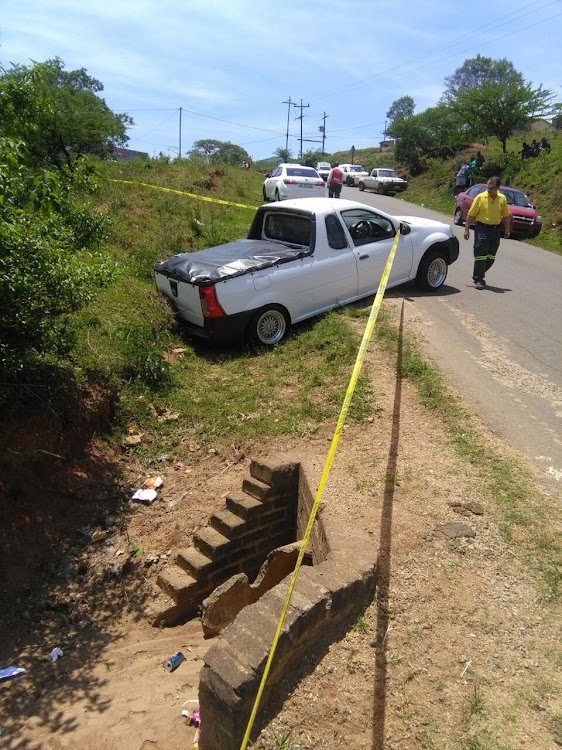 Moses Mabhida ANC member Lungisani Mnguni was driving his bakkie outside Pietermaritzburg when he came under fire and crashed.
Image: SUPPLIED

A KwaZulu-Natal ANC leader who had been elected as a delegate to next month’s ANC national elective conference was gunned down in Nkanyezini‚ Camperdown‚ near Pietermaritzburg on Monday morning.

The ANC in the Moses Mabhida region identified the victim as Lungisani Mnguni‚ 34.

CR17 spokesperson Sithembiso Mshengu said Mnguni was recently elected as a delegate to the December conference‚ and that his branch had nominated Cyril Ramaphosa as their presidential candidate.

He was assassinated in Ward 3‚ ironically the same ward in which Mkhambathini Ward 3 councillor Everlast Mkhize was gunned down after a branch meeting in August.

Mnguni‚ a businessman‚ was involved in the school-food nutrition programme in the area‚ and it appears that he was attacked while on his way to make a delivery to one the local schools.

Presidential hopeful Cyril Ramaphosa kicked off his final campaign in KwaZulu-Natal on Sunday.
News
3 years ago

“He is the former ANC branch chairperson in Ward 7. The ANC is horrified at losing such a young comrade. The passing of Comrade Mnguni will leave a void in the ranks of the ANC‚ the alliance and the mass democratic movement in general‚ that will not be easy to fill‚” said Zuma.

Police in KwaZulu-Natal said in a statement that Mnguni was driving his vehicle‚ a Nissan NP200‚ on his way to supply food to a local school‚ when he was accosted by unknown suspects‚ who fired shots at him and fled in their getaway vehicle.

According to the statement: “His vehicle crashed and he alighted onto an embankment‚ where he died. The motive for the killing is unknown at this stage. The deceased is originally from Illovo. A case of murder has been opened for investigation at Camperdown SAPS.”

Zuma said that as an activist‚ Mnguni was always available to serve his organisation to a high degree. “His outstanding leadership skills will be sadly missed by many in the ANC especially‚ who benefited from his unparalleled wisdom.

“The ANC calls on those who might have witnessed this brutal murder to come forward with information that could assist the law enforcement agencies to make an arrest‚ and ensure a successful prosecution of the perpetrators of this shameful act‚” Zuma said in closing.