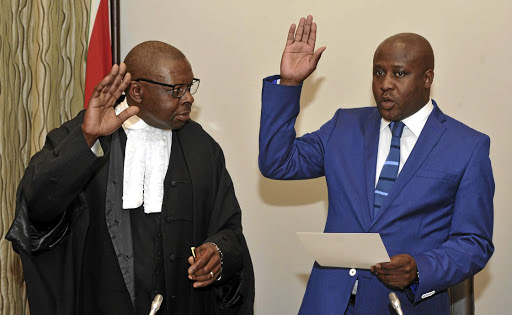 The Democratic Alliance is to lay corruption charges against newly appointed Minister of State Security Bongani Bongo for allegedly attempting to bribe the evidence leader of the parliamentary inquiry into state capture‚ Advocate Ntuthuzelo Vanara.

It said it would be laying the charges in terms of the Prevention and Combating of Corrupt Activities Act (12 of 2004).

The party will also lodge a formal complaint with the Public Protector to investigate Bongo’s alleged violation of the Executive Members’ Ethics Act (82 of 1998)‚ said John Steenhuisen‚ the DA’s chief whip.

This follows media reports that Bongo is to be investigated by Parliament’s joint ethics committee for allegedly trying to bribe Vanara.

Reverend Frank Chikane has spoken out strongly against state capture.
News
4 years ago

“If proved to be true‚ these allegations serve as basis for criminal charges to be pursued and they further amount to a gross violation of the provisions of the Executive Members’ Ethics Act and the associated Executive Ethics Code which‚ amongst others‚ prohibits ministers from using their position to enrich themselves or improperly benefit any other person and requires that ministers fulfil all obligations imposed upon them by the constitution and law‚” Steenhuisen said.

The latest raft of allegations further demonstrate a deeply concerning trend for Bongo and the beleaguered State Security Agency (SSA)‚ he added.

“Despite the fact that minister Bongo has only recently been appointed following President Jacob Zuma’s cabinet reshuffle on 17 October‚ it has already emerged that he is currently under active investigation by the Directorate for Priority Crime Investigation (Hawks) for his alleged involvement in fraud and corruption while he served as the head of legal services in the Department of Human Settlements of Mpumalanga in 2012.

“The DA has already undertaken to submit parliamentary questions to ascertain if Bongo was properly vetted by the SSA prior to being appointed.

“We will now escalate our efforts to ensure that credibility and the rule of law is returned to the operation of the SSA through criminal charges and our complaint to the Public Protector‚” Steenhuisen said.