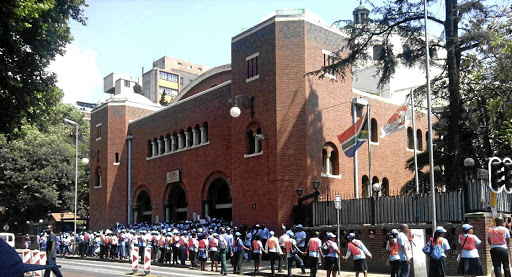 The Revelation Church of God in Hillbrow, Johannesburg, whose members attacked a police officer on Sunday. Image: TWITTER

Sleepless nights‚ an inability to eat and severe chest pains are the reminders Siphiwe Sebati has of being surrounded and beaten outside a church in Hillbrow on Sunday.

Sebati‚ who is a Johannesburg metro police officer‚ spoke to TimesLIVE on Wednesday at his home in Pimville‚ Soweto.

He described how‚ three days after the attack‚ he was still struggling to sleep.

“I can’t eat because my jaws are painful. I can’t fully open my mouth. My neck is still painful and my back is also painful‚” Sebati said.

“I’m not okay. My ribs are still sore. I’m not fully recovered. I can’t sleep because of the trauma I went through.

“I have nightmares and end up waking up and I stay awake the whole night. Like last night‚ this thing was playing in my head until the morning and I could not sleep.”

Metro police officer who was assaulted by churchgoers has told of how he saw his life flashing before his eyes.
News
4 years ago

Sebati was attacked by members of the Revelation Church of God on Sunday after he and his colleagues moved an illegally parked vehicle belonging to one of the congregants.

A group of furious church members attacked him‚ beating and kicking him before taking his firearm.

Sebati was left unconscious. Two of the congregants were later arrested when they handed Sebati’s firearm back to the police.

The whole incident was captured on camera and shared on social networks.

“I’m not happy. I feel like we are not being respected as officers in the field.”

He further explained how he was able to prevent anyone from getting hurt while tussling over the gun with the congregants.

“It is the training that I got from JMPD while we were trained at the shooting range. We were trained how to deal with such a situation‚ in particular‚ the handling of the gun‚” said Sebati.

“[During the attack] I knew that anything could happen when they were taking the gun‚ but I tried to protect them and myself too. I had to release the gun in my hand because I could see that the firearm would hurt so many people.”

Sebati’s lawyer‚ Mamodupi Mohlala‚ said her client was considering taking legal action against the church and would also ask the Commission for the Promotion and Protection of the Rights of Cultural‚ Religious and Linguistic Communities to take action against the congregation and its leader.

A man and a woman‚ both congregants of the Revelation Church of God‚ have been arrested.
News
4 years ago

A Johannesburg church has defended itself after a violent incident between its members and Johannesburg metro police.
News
4 years ago

SAA Minister Bongani Bongo has asked church leaders to pray for politicians and stop talking about tenders.
News
4 years ago
Next Article