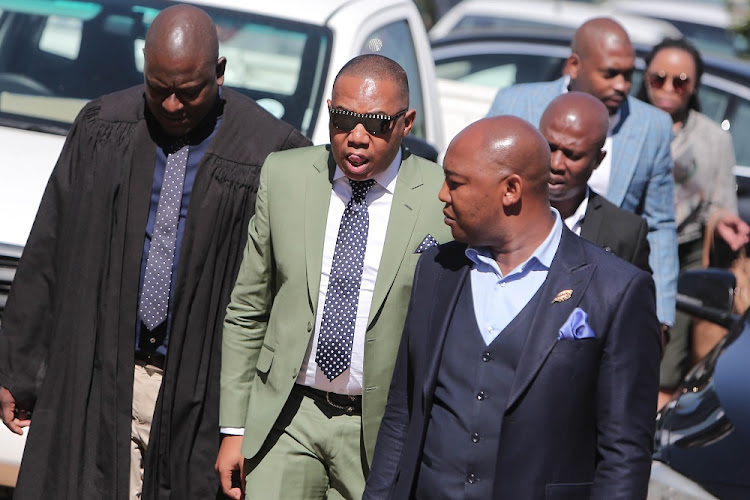 Former deputy higher education minister Mduduzi Manana could be facing another sanction for the assault of three women as Parliament’s ethics committee considers complaints brought against the convicted MP.

Parliament spokesperson Moloto Mothapo said there had been a number of complaints received by the committee‚ chaired by Amos Masondo.

“The issue of Mr Manana is being dealt with by the [parliamentary ethics] committee because there have been a number of complaints that have been submitted there. The committee has started the process and once they are done with their inquiry‚ they will submit their recommendations to the Speaker (Baleka Mbete) for further processing by the house‚” Mothapo said.

Mduduzi Manana must pay a fine of R100‚000 in addition to reporting for community service.
News
4 years ago

He said the complaints were submitted by the non-profit organisation Women’s Legal Centre‚ supported by Sonke Gender Justice. However‚ Mothapo could not‚ however‚ confirm whether opposition parties have laid a complaint against Manana.

On Monday‚ the Randburg Magistrate’s Court sentenced a smiling Manana to a fine of R100‚000 or 12 months in jail. The court also ordered that he complete a rehabilitation programme and do 500 hours of community service for hitting three women at Cubana restaurant in Johannesburg on August 6.

The court ordered that Manana attend an anger-management programme and declared him unfit to possess a firearm.

Magistrate Ramsamy Reddy ordered that‚ in addition to the fine‚ he financially compensate each of his victims. He was ordered to pay Noluthando Mahlaba R5‚014‚ Mandisa Duma R20‚263 and Thina Mapipa R1‚403.

EFF‚ Not In My Name and NPA react to Manana sentence

EFF will seek legal advice on the sentencing of Mduduzi Manana.
News
4 years ago

The South African Federation of Trade Unions said they were “disgusted” by the “lenient” sentence that Manana had received.

“Any sentence that offers the offender a choice between a fine and imprisonment is inherently biased against the poor. R100‚000 for many unemployed workers is impossible to raise and the sentence effectively means 12 months in jail. For a relatively wealthy former minister like Manana‚ R100‚000 can probably be paid off within minutes on his laptop or smart phone‚” the union said.

The ANC’s Integrity Commission made a surprise u-turn on Tuesday as they will no longer take any action against the former deputy minister.

This is despite its chairperson‚ Andrew Mlangeni‚ revealing to TimesLIVE three months ago that the commission would meet and conduct its own investigation into Manana’s conduct.

“Manana has admitted his mistake and has apologised for his actions. He has also appeared in court and was found guilty and the sentence was passed. Anybody who is not happy about it (sentencing) is free to raise the matter with the leadership of the ANC or even with Parliament‚ for that matter‚” said Mlangeni.

“My Integrity Commission has not met and I don’t think we will take action against him. He has already been found guilty and sentenced and did not deny what he did.”

Manana was found guilty of three counts of assault with intent to cause grievous bodily harm.

When the incident happened‚ Mlangeni said that before steps could be taken against Manana‚ the commission had to find out whether the assault allegations were true or not‚ despite Manana releasing a statement apologising to his victims days after the incident occurred.

The office of the ANC chief whip in Parliament said the party was not aware of any intentions to discipline Manana.

“I’m not aware of any steps that will be taken against him. He has been on leave pending the outcome of his court case and he requested leave of absence from parliament when the incident happened and that leave was granted‚” said spokesperson Nonceba Mhlauli.

“He has been on leave of absence to deal with his personal issues‚ including counselling as well as the case that was just concluded‚” she added.

Mhlauli said the conditions of Manana’s leave of absence include that he go for voluntary counselling. The institution where he conducted his counselling would then need to submit a report to the office of ANC Chief Whip Jackson Mthembu.