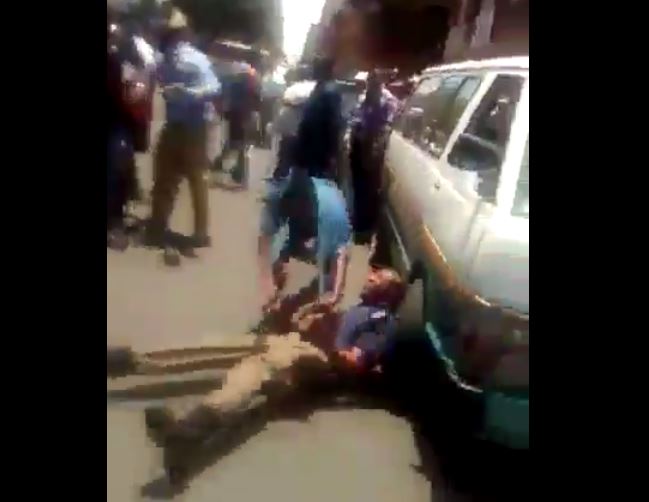 The Revelation Church of God members clash with a Johannesburg Metro Police Department officer in the Johannesburg CBD .
Image: TWITTER/@MakeSAsafe

A Johannesburg church has defended itself after a violent incident between its members and Johannesburg metro police‚ which resulted in an officer ending up in hospital.

On its Facebook page‚ The Revelation Church of God said: "Instead of police helping to remove squatters from our land‚ they choose to attack church members with shootings & paper (sic) sprays ... This is the Freedom we fought for‚ for our own people to attack us."

Metro police said on Sunday that one of its officers and a tow truck driver were attacked by members of the church in Hillbrow.

The city said the attack took place when the two officials hooked up an illegally parked car‚ which belongs to a member of the church on Claim Street in Hillbrow‚ as the vehicle was causing traffic congestion.

It is believed that the metro police officer drew his firearm and fired into the air to stop rioting congregants from advancing toward them‚ but the crowd did not heed the warning and proceeded to attack the officer.

This is the Freedom we fought for,,for our own people to attack us,,

Posted by The Revelation Church of God on Sunday, 12 November 2017

The mob overpowered and disarmed the officer‚ who was beaten and left unconscious and had to be rushed to Milpark Hospital.

One of the congregants was arrested when the JMPD officer's firearm was handed back at the Johannesburg Central Police Station.

"We will not allow this attack on our Metro Police to go unprosecuted‚ the culprits will have to face the full might of the law‚" said Sun.

"He was unconscious when he was taken in‚ but he was observed last night and taken for tests. I can't confirm if he has been discharged this morning but he did gain consciousness."