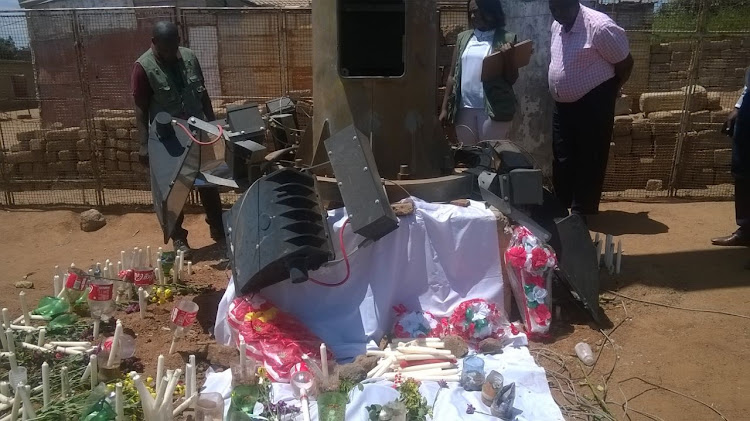 You were supposed to give them light

Not take their light out of them

Did you come down?

Because you were also in agony?

OH! What did they do to you?

This is a verse from a heart-wrenching poem recited by four grieving pupils of Mmabana Primary School in Soshanguve on Thursday during the memorial service of five of their peers killed when a panel from a high light mast fell on them.

One of the deceased children‚ Lethabo Matibako‚ 9‚ and another child who was injured in the incident that happened on Saturday afternoon‚ leaving the community reeling with shock‚ are from Mmabana Primary school.

Earlier‚ a choir from the school sang a similarly sombre hymn‚ “light‚ show me the way/ so I could leave in peace and love/it is dark” in their sweet but sorrowful little voices.

The children were sitting on a concrete slab anchoring the high mast light in Block X‚ Soshanguve‚ when the panel holding the lights came crashing down on them‚ killing four instantly.

The fifth victim died later at the Dr George Mukhari hospital in Ga-rankuwa. One child has survived the horrific accident that the Tshwane municipality has blamed on rampant cable theft. But grieving relatives do not believe this and are demanding answers from the municipality.

They want to know why the light panel of the high light mast‚ which stopped working almost a year ago‚ came crashing down.

Theft of electric wires is what possibly led to the unsteadiness of a highlight mast which collapsed on a group of five children.
News
4 years ago

Anna Shabangu‚ aunt of one of the deceased‚ Maikano Khoza‚ 9‚ said someone must take responsibility for the incident.

“We are in unimaginable pain‚ people must take responsibility. Cable theft cannot cause the (panel) to fall. We want answers on what happened. They are not taking responsibility‚” she said.

Elvis Nongame‚ principal of Lesedi Potlana primary school‚ which lost three pupils in the incident‚ said a dark cloud has befallen the community.

“Those of us who went to the scene still cannot get sleep‚” he said.

Gauteng ANC chairperson and MEC for human settlement Paul Mashatile said a full investigation must be conducted to get to the bottom of what really happened.

“We must not speculate but investigate‚” he said.

The deceased will be buried in a mass funeral on Saturday that will be covered by the Tshwane municipality.