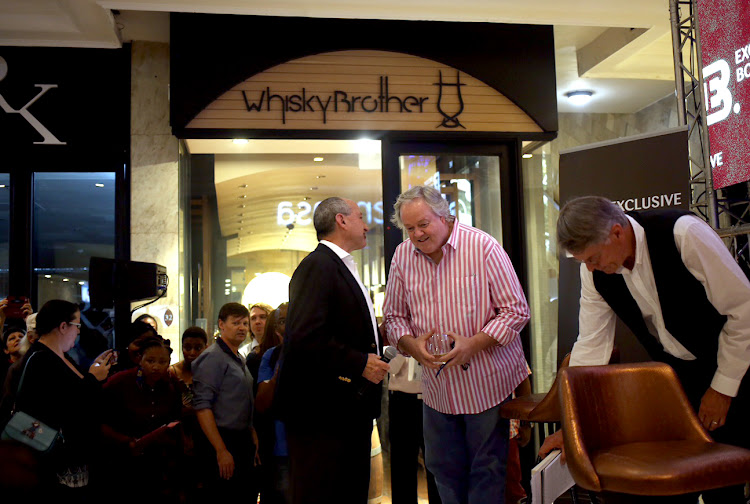 Author Jacques Pauw (in striped shirt) prior to the official launch of his book The President's Keepers at Exclusive Books in Hyde Park, Johannesburg. Image: ALON SKUY

The launch of the controversial book The President’s Keepers by Jacques Pauw was cancelled on Wednesday night after a power outage at Hyde Park Corner in Johannesburg.

Pauw was about 40 minutes into a discussion about his book with former Business Day editor Peter Bruce when the power was cut.

There were boos and some parts of the crowd started chanting “Zuma must fall“.

A woman got on stage during the power outrage and started singing Nkosi Sikelel’ iAfrika.

After the power briefly came back on the crowd cheered‚ but it was to no avail.

After several attempts to restore the power‚ Bruce announced the launch was cancelled.

Pauw seemed unfazed‚ smiled and greeted old friends as the security tried to block members of the public who wanted to get their copies signed.

Pauw moved to Exclusive Books to sign copies of his book after about 1‚000 people filled the first and second floors of the mall to hear Pauw speak.

SSA sent out a second cease-and-desist letter to get The President’s Keepers removed from shelved.
News
4 years ago

“If you don’t stop writing about Jacob Zuma‚ you are going to be dead.”
News
4 years ago

The publisher of The President’s Keepers has appealed to South Africans not to take advantage of a “pirated and hacked” PDF copy of the book doing ...
News
4 years ago

State Security has told the publisher of "The President’s Keepers" to cease and desist from printing any more copies.
News
4 years ago
Next Article