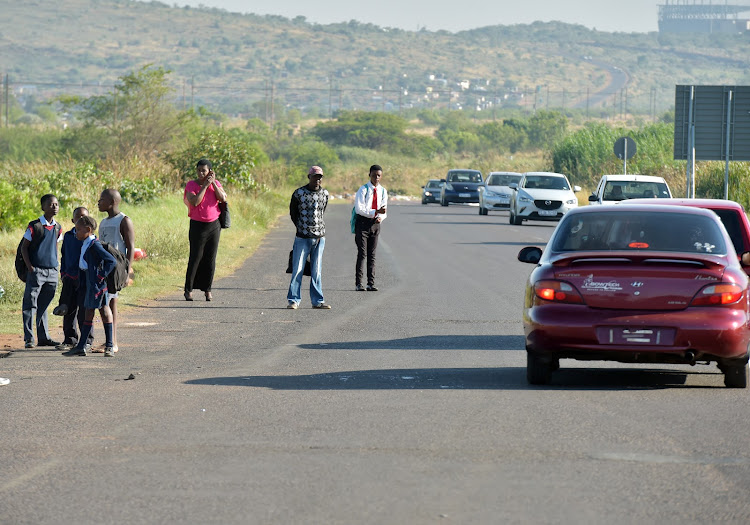 08/11/2017 School learners stranded in Soshanguve as result of the National Taxi Alliance (NTA) protest march hand over a memorandum to the Department of Transport and the Union Buildings.
Image: PHILL MAGAKOE

Scores of commuters in Soweto are scrambling to find alternative transport as local taxi operators join in the National Taxi Alliance (NTA) strike.

The alliance is expected to march to the offices of the minister of transport in Tshwane over several issues‚ including a request for a government subsidy‚ licensing and operating permits.

Thousands of taxi operators are expected to support the march.

“I just got a part-time job and was expected to be in town by 6am but I couldn’t make it because of the taxi strike. We don’t have a train station nearby and the bus is more expensive‚” said Sandile Hobo from Zola.

Baracity Taxi Owners Association (BTOA) secretary Themba Mbense said all taxi services in Soweto have been suspended for a day and operators are already driving to Tshwane to voice their grievances.

“It’s unfortunate that the government we voted for continues to neglect the taxi industry. These are old issues and should have been long addressed to improve the industry. The minister has been playing hide and seek for a long time. That is why we have decided to drive to his office to table our demands‚” Mbense said.

Mbense said commuters were informed days ago about the strike and were advised to make alternative arrangements.

The association apologised to commuters who have been inconvenienced.

Some locals have resorted to trains and buses. Others got lifts from passing motorists.

No incidents of violence or intimidation have been reported.

“We are not partaking in the strike‚ however‚ we have noticed before that our bus drivers and buses were previously stoned. We will keep commuters informed of any developments‚” wrote the Tshwane Bus Services on Twitter.

Several roads will be affected in Tshwane due to the march.

The traffic department has warned motorists to use alternative routes.