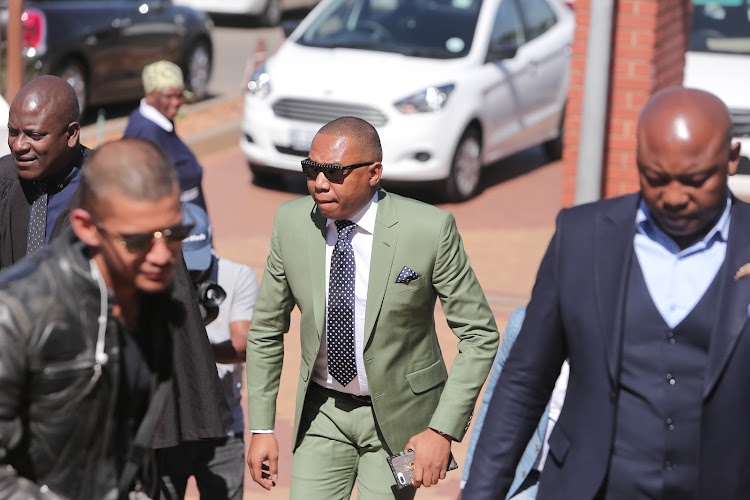 The Randburg Magistrate’s Court has heard that former deputy minister of higher education Mduduzi Manana has two previous theft convictions‚ one involving stealing a can of Coke.

This was revealed by the state as sentencing proceedings commenced on Wednesday after the matter was postponed on Tuesday.

His attorney‚ Michael Bill‚ had asked the court to postpone the matter to allow his defence team to study probation and correctional services reports.

Manana‚ 33‚ clad in a tailored green suit‚ white shirt‚ and black shoes‚ admitted to his conviction of stealing a can of Coke in May 2005. Manana said he had no recollection of a second theft in May 2005.

Manana will be sentenced later on Wednesday over three counts of assault to cause grievous bodily harm‚ after he earlier this year admitted to attacking two women at a restaurant in Fourways in the north of Johannesburg. He has pleaded guilty to all charges.

On August 6‚ Manana lost his cool after an argument over who should succeed President Jacob Zuma at the ANC’s elective conference in December.

Manana says he is 'quite remorseful and has taken responsibility'

Sentencing of former Deputy Minister of Higher Education Mduduzi Manana has been postponed for a day.
News
4 years ago

In a shock move on Tuesday morning‚ President Jacob Zuma reshuffled his cabinet‚ swapping around six of his ministerial portfolios.Most notably‚ SA ...
News
4 years ago

The ANC Youth League in the Western Cape has slammed some of its members who issued a statement contradicting its leadership’s call for deputy ...
News
4 years ago

DA to report Manana to Commission for Gender Equality

The Democratic Alliance is to report Deputy Higher Education Minister Mduduzi Manana who has been charged with assaulting three women at a ...
News
4 years ago

Mduduzi Manana: the boss from hell

Mduduzi Manana is a boss from hell who has been accused by his staff of temper tantrums‚ blackmail and blatant abuse‚ the Sunday Times reported. It ...
News
4 years ago
Next Article