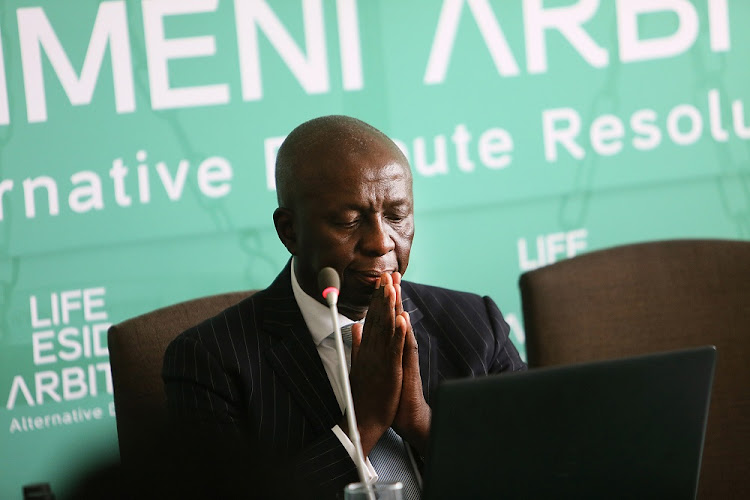 Retired Deputy Chief Justice Dikgang Moseneke is heading the arbitration hearings between the State and the families of victims in the Life Esidimeni tragedy.
Image: ALON SKUY/THE TIMES

One of the leaders behind the Esidimeni tragedy‚ who is refusing to abide by his subpoena to explain himself‚ has filed court papers asking former Deputy Chief Justice Dikgang Moseneke to appear in court.

Former head of the Gauteng Health Department Dr Barney Selebano has been subpoenaed to appear at the Esidimeni hearings on December 4‚ after telling the state he would not come willingly.

Moseneke is the judge at the hearings‚ which are to give closure to families of the more than 118 mentally ill people who died by February this year‚ in ill-equipped NGOs.

Moseneke has said the hearings will not end until the three people behind the decision to close the Life Esidimeni homes testify. This includes Selebano‚ former MEC Qedani Mahlangu and former Director of Mental Health Makgoba Manamela.

One of the three officials behind the Life Esidimeni move‚ Dr Barney Selebano‚ has contested his subpoena to appear at the hearings.
News
4 years ago

On Wednesday‚ state advocate Tebogo Hutamo told the hearings that Selebano had filed an urgent interdict in the Johannesburg High Court to set aside "the subpoena requiring him to appear before these proceedings". Hutamo said the court case will be heard on 28 November.

Hutamo said that "[the] state's view [is that] Selebano should appear before hearings".

Selebano did not cite Section 27 - representatives of the families at the hearing - in his application‚ which he should have done‚ advocate Adila Hassim told the hearing.

"I am cited as a party"‚ Moseneke told the hearing to much laughter. "I might have to shut this [hearing] down and go fight this case in court‚" he said to further chuckles. "I thought I was just doing my public duty and now I am in a case because a witness … doesn’t want to ... appear before arbitration."

Lawyer Ulrich Roux‚ not involved in the process‚ explained that while he doesn’t know why Selebano is challenging the subpoena‚ "in theory any subpoena can be reviewed in court".

Dr Makgoba Manamela‚ who was one of three leaders who ran the project to shut down Life Esidimeni Homes‚ has lost her appeal.
News
4 years ago

Manamela‚ who moved patients into crowded NGOs‚ rejected her first subpoena to appear last week‚ because there was a minor problem with its date. She has now been subpoenaed to appear on 20 November and has not yet objected‚ Hassim told the hearing.

Mahlangu is in London‚ United Kingdom. Hutamo said he was in conversations with Mahlangu's new lawyers about her testifying this month. However‚ he said the state could not serve a subpoena on Mahlangu‚ because it did not know her residential address in England.

Mahlangu's lawyer Angelo Christophorou told TimesLIVE Mahlangu had not misled anyone about her whereabouts and was not "evading her responsibilities".

Christophorou stated to The Times on the weekend that Mahlangu was studying at the University of Bedfordshire‚ when yesterday it emerged she was studying at Global Banking School in London and had been suspended.

"Our client is not evading responsibilities and as at all material times tendered to attend the arbitration."