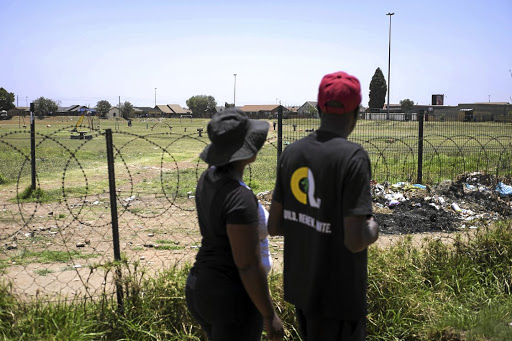 The father and mother of two different underage girls look across an empty playground in Tsakane, Ekurhuleni. Their children are among a group of girls who spend time smoking nyaope in the neighbourhood. They are accused of prostitution as well. / Greg Roxburgh

Parents and neighbours have accused a community member of running a drug den in Tsakane, Ekurhuleni.

A shack in the township is used by teenage girls aged between 13 and 15 to allegedly smoke nyaope and sniff glue.

Three children were taken to their homes by police on Thursday, but were allegedly back at the shack on Saturday.

A father of the 15-year-old girl said he reported the matter to police and social workers but nothing has happened.

"I am waiting for a phone call that will tell me to fetch her corpse so I can only cry once and be at peace with the fact that she is dead and buried," he said.

"It hurts to see other children going to school because that is the future I envisaged for her. I also worry about her health as she is on HIV treatment."

The mother of a 14-year-old girl who dropped out of school said she spends sleepless nights worried about the safety of her daughter.

"I can't take the pain of seeing my daughter throwing her future down the drain. I work very hard for them not to go to bed on empty stomachs," she said.

When Sowetan visited the shack, the owner, whose name is known to Sowetan, said she became aware of the shenanigans in the shack after she was alerted by community members.

"The police fetched me from work and when I got here my shack was full of girls smoking nyaope and sniffing glue," she said.

A neighbour, who asked not to be named for fear of reprisal, said: "We are sick and tired of what is happening in that shack. She is prostituting these young girls to older men."

Another neighbour said: "We fear for our children's safety; that shack should be demolished."

Sergeant Lerato Mngomezulu said they found the girls in an appalling condition.

"They were sleeping but one could see they haven't bathed for days.

"Their condition is worrying, their parents seem to have given up on them."