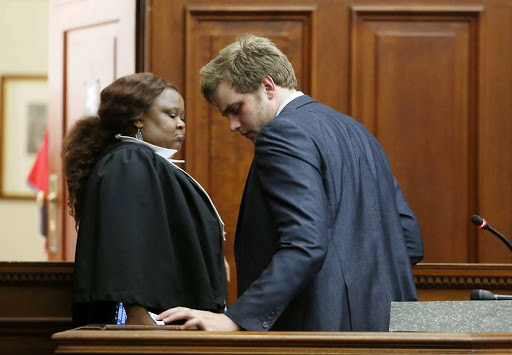 Van Breda in action in the dock.
Image: ESA ALEXANDER

In a chilling moment in the High Court in Cape Town on Wednesday‚ Henri van Breda lifted up an axe and swung it down onto an imaginary brother Rudi lying in a bed close by.

He had been asked by state prosecutor Susan Galloway to describe what he saw unfolding in the bedroom he shared with his brother on the night of January 26 2015‚ when Rudi and his parents were brutally hacked to death with an axe.

The state had brought in replicas made from lightweight material that resembled both the axe that had wiped out his family members and left his sister for dead‚ and the knife that Henri alleges he wrested from the attacker who had cut him several times with it.

As Galloway walked Van Breda through those moments when the first attack began‚ Van Breda described how he had stood there watching.

Referring to his plea statement‚ Galloway asked him to confirm that he had called for help and pointed out that the attacker must have then heard but simply ignored him.

“It would be strange if he had noticed you and just ignored you. At the moment that you say you began shouting for help – did that not distract him?”

“Did he not for instance turn around and attack you?”

Galloway said: “So‚ had he stood between the two beds‚ as you describe‚ you would not have been that far away from him‚ yet he does not attack you and ignores you‚ even though you are making sounds and calling for help?”

She asked if such a purposeful attack on Rudi with no distractions – even a brother standing in the same vicinity calling for help – could indicate he was the specific target and Van Breda said yes.

He also came under harsh criticism earlier in the day for introducing new details “so that his timeline could work”.

In his original statement‚ Van Breda gave a timeline in which the men in the family were watching a movie around 8pm.

During the state leading evidence in chief‚ a neighbour testified that she had heard males having an aggressive fight around 10pm. The defence insisted‚ however‚ that it was the soundtrack of Star Trek 2 and not a fight.

Van Breda only recently introduced evidence that his father “worked on his laptop for a few hours before we watched the movie” and that he had not mentioned it before because “it didn’t seem relevant”.

He had also said in his plea statement that Rudi had gone for a run that night‚ but during testimony he said he assumed that because Rudi had declined alcohol once home and never drank after running.

As Galloway highlighted many changes to his recollection of that night‚ Van Breda brushed it off by saying that “the trial jogged my memory” or “Colonel Beneke put things in the statement that are not accurate.”

When asked why he had signed the statement‚ he said the process had not been fair.