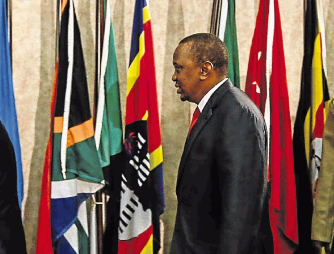 Kenyatta's Kikuyu ethnic group, the nation's most populous, has produced three of four presidents since independence from Britain in 1963, but does not have a presidential candidate this time.
Image: Moeletsi Mabe

Kenyatta's Kikuyu ethnic group, the nation's most populous, has produced three of four presidents since independence from Britain in 1963, but does not have a presidential candidate this time. Recognising the importance of ethnic voting blocs, both frontrunners have picked a Kikuyu vice president.

Presidential candidates George Wajackoyah and David Mwaure Waihiga are polling in low single-digit numbers, but votes going their way might mean neither Odinga nor Ruto secure a majority, pushing the race to a second round.

Ruto heads the Kenya Kwanza (Kenya First) Alliance and served as a lawmaker and minister for agriculture before becoming deputy president.

In the 2007 election, Ruto sided with Odinga and lost. Around 1,200 people were killed in the violence that followed.

He was later charged with crimes against humanity at the International Criminal Court for his alleged role in the violence, but the case collapsed. He denied any wrongdoing.

Debt shadow may hang over Kenya's next president

Kenya's economic output has more than doubled during President Uhuru Kenyatta's 10 years in office, but a debt binge that fuelled growth and ...
News
2 weeks ago

A former political prisoner, Odinga says the last three elections were stolen from him. Deadly violence followed the disputed 2007 and 2017 votes.

Odinga has pledged to stamp out widespread graft and give a monthly stipend to the unemployed, universal healthcare and free education to all. He named his eldest son Fidel in a nod to his left-wing sympathies.

His political heartland is in western Kenya, whose residents have in the past complained of neglect by the government due to their support for the opposition.

Wajackoyah, 63, who describes himself as a lawyer, academic and former spy, is running under the Roots Party of Kenya banner.

He pledges to legalise cultivating marijuana for industrial and medicinal use, and export hyena testicles and snake venom to help pay Kenya's external public debt.

He also plans to suspend parts of the constitution for six months and hang anyone convicted of corruption.

He has attracted some young voters and enraged many religious leaders.

Waihiga, also a lawyer, is running on the Agano Party of Kenya ticket.

He pledges to tackle government graft, and publish the government contracts for major infrastructure projects such as railways, ports and highways.