Death toll from Somalia attack that killed lawmaker rises to 15 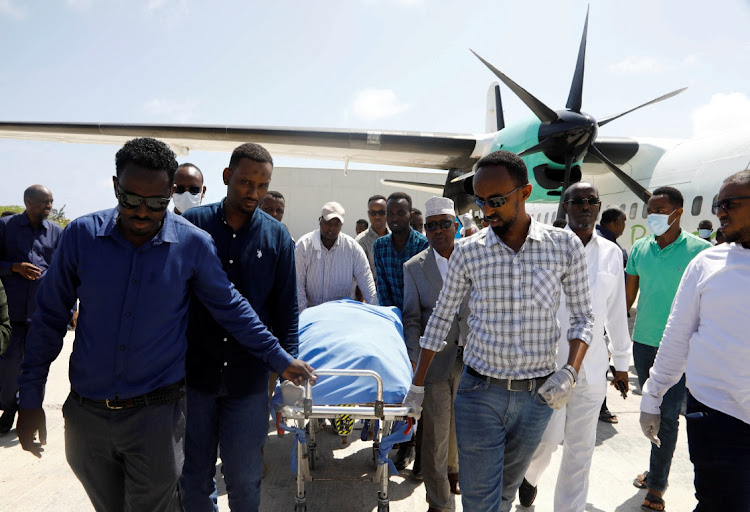 Relatives and Somali government officials wheel the slain body of Amina Mohamed, a vocal critic of the government, who was killed in a suicide explosion in Beledweyne, at the Adan Abdulle International Airport international in Mogadishu, Somalia March 24, 2022.
Image: Feisal Omar

Mogadishu – The death toll from Wednesday's attack in central Somalia in which a parliamentary election candidate was killed has risen to 15, state-run television said.

Amina Mohamed, a vocal critic of the government, was killed by a suicide bomber in the city of Beledweyne, around 300km north of Mogadishu, witnesses and relatives said.

No one claimed responsibility for the attack.

Somalia is conducting parliamentary elections in an indirect process that involves clan elders picking the 275 members of the lower house, who then choose a new president on a date yet to be fixed.

In a statement late on Wednesday, Prime Minister Mohamed Hussein Roble said Wednesday's killings were aimed at disrupting the elections.

On February 19, another blast in Beledweyne, the provincial capital of the Hiran region, killed 15 and injured 20 people. The targets of the suicide bomb attack in the crowded restaurant was seemingly some of the politicians and government officials who were in the establishment at the time.

Meanwhile, data from the election commission shows that the election of 246 lawmakers has so far been been completed, ahead of the April 15 deadline.

A bomb that looked like a "jackfruit" killed at least two children in a Ugandan village on Friday, after being given to the children while they were ...
News
6 months ago

A suicide car bomb killed at least eight people in the Somali capital on Saturday at a street junction near the president's palace, police said, and ...
News
8 months ago

Al Shabaab fighters stormed a military base in the centre of Somalia on Tuesday and recaptured a town it lost to government forces earlier this ...
News
8 months ago

A suicide car bomb targeting a government convoy exploded at a busy junction in Somalia's capital on Saturday, killing at least eight people, an ...
News
10 months ago
Next Article