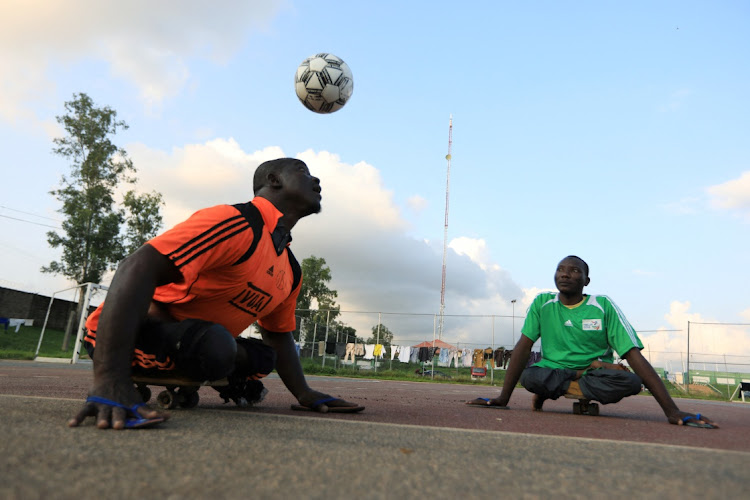 A victim of polio heads the ball during a game of soccer in Abuja, Nigeria, on August 22 2020. The world is at a 'dangerous moment' in the fight against diseases like polio, a senior WHO official has warned, as efforts begin to immunise 23-million children in five African countries after a case in Malawi. File photo.
Image: REUTERS/Afolabi Sotunde

The world is at a “dangerous moment” in the fight against diseases like polio, a senior World Health Organisation (WHO) official says, as efforts begin to immunise 23-million children in five African countries after a case in Malawi.

In February, Malawi declared its first case of wild poliovirus in 30 years when a three-year old girl in the Lilongwe district was paralysed as a result of her infection.

The case raised alarm because Africa was declared free of wild polio in 2020 and there are only two countries in the world where it is endemic: Afghanistan and Pakistan. Pakistan marked a year without cases in January 2022.

“This is a dangerous moment,” Modjirom Ndoutabe, polio co-ordinator for WHO Africa, told Reuters in a phone interview from Brazzaville, Republic of the Congo.

“If there is one country in the world with polio, all other countries are in big trouble.”

In a bid to prevent renewed spread in Africa, close to 70,000 vaccinators will go door-to-door in Malawi, Mozambique, Tanzania, Zambia and Zimbabwe to give all children under the age of five the oral polio vaccine

Ndoutabe said the coronavirus pandemic and lockdowns slowed efforts to vaccinate children against other diseases such as polio, and hit surveillance.

According to the Gavi vaccine alliance, childhood immunisation services in the 68 countries it supports dropped by 4% in 2020, representing 3.1-million more “zero-dose” children likely unprotected from childhood diseases like polio, diphtheria and measles, and 3-million more under-immunised children than in 2019.

“This is a tragedy,” Seth Berkley, CEO of Gavi, said in an interview with Reuters.

“The challenge is getting that back up.”

In Malawi, where polio vaccine coverage is high — more than 90% in most districts — rates during the pandemic fell by 2%, according to Janet Kayita, WHO Malawi head. She said the child who was paralysed had one dose of the polio vaccine at birth, but not the other doses needed for full protection.

Kayita said surveillance had been more significantly affected. The case is linked to a strain circulating in Pakistan’s Sindh province in 2019, which means it does not affect Africa’s polio-free status. However, teams are scrambling to answer how it arrived in Malawi, and how long it spread undetected.

Polio, a highly infectious disease spread mainly through contamination by faecal matter, used to kill and paralyse thousands of children annually. There is no cure, but vaccination brought the world close to ending the wild form of the disease.

In a bid to prevent renewed spread in Africa, close to 70,000 vaccinators will go door-to-door in Malawi, Mozambique, Tanzania, Zambia and Zimbabwe to give all children under the age of five the oral polio vaccine in a $15.7m (R235m) campaign funded by the Global Polio Eradication Initiative, the WHO said on Friday.

The first round, beginning on Monday, will target more than 9-million children, followed by three rounds aiming to reach all those younger than five, regardless of their vaccination status, to boost immunity, Kayita said.

Efforts have also been stepped up to track any cases linked to the Malawi outbreak and to monitor transmission in waste water. To date, no other linked cases have been found.

Israel faces concerns about vaccine-derived polio, its first since the 1980s, after a case was discovered in Jerusalem last week. Almost 12,000 children have since been vaccinated.

Complete vaccination protects against both forms of the disease, and a focus on that will halt the outbreak in Malawi in months and all forms of polio in Africa by 2023, said Ndoutabe, who described his sorrow when he first heard of the Malawi case setback.

“However, we did not stay in this sadness. We had to act quickly,” he said.

The covid-19 vaccines which are about to hit South Africa later this month are the only effective weapon to break the momentum that the covid-19 ...
News
1 year ago
Next Article