Seven dead in crackdown on anti-coup rallies in Sudan -medics 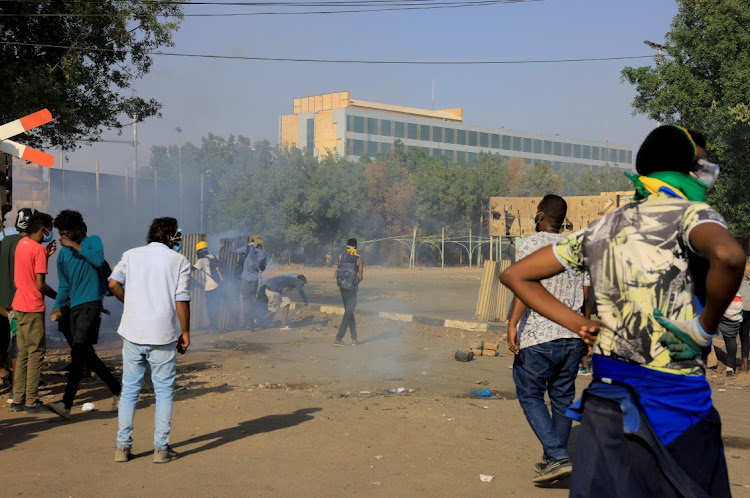 Protest organisers in Sudan's capital Khartoum announced two days of strikes and civil disobedience after security forces used gunfire and teargas on Monday to disperse demonstrations against a coup and medics said seven people had been killed.

The toll marked one of the bloodiest days since pro-democracy groups began a campaign of anti-military protests following the Oct. 25 coup, and threatened to deepen the gulf between military leaders and a large protest movement.

Security forces fired volleys of tear gas as they blocked thousands of protesters from advancing on Khartoum's presidential palace, and several injured civilians could be seen bleeding heavily in the street, a Reuters witness said.

They also used live ammunition and stun grenades, said the Central Committee of Sudanese Doctors, a group of medics aligned with the protest movement that reported the seven deaths.

Medics told Reuters that many others were being treated for injuries at Khartoum hospitals.

“The military prepared a massacre for us today, and all we've done is ask for civilian rule and democracy,” said Mohamed Babaker, a 19-year-old student.

A police spokesman said a statement would be released later. Government sources put the death toll from Monday at three.

Huge crowds have regularly taken to the streets demanding civilian rule since the coup ended a military-civilian power-sharing arrangement agreed to after Islamist autocrat Omar al-Bashir fell during an uprising in 2019.

Military leaders reinstated Prime Minister Abdalla Hamdok in November in an attempt to safeguard economic reforms, but he resigned earlier this month.

Medics say at least 70 people have been killed by security forces since the coup.

“What is happening in Sudan now is a full-fledged crime ... the free world must act,” Faisal Mohamed Salih, a former information minister in the transitional government after Bashir's fall, said in a social media post.

A security and defence committee formed under Sudan's ruling council commended security services for their “restraint” and protection of civilians, paying tribute in a statement to a police officer killed in protests on Thursday.

It said it would establish an antiterrorism force to counter “potential threats”, but did not elaborate.

U.S. State Department spokesman Ned Price said on Twitter the US was “concerned by reports of escalating violence”.

He noted that Assistant Secretary of state Molly Phee and new Special Envoy David Satterfield “are headed to Khartoum and will reiterate our call for security forces to end violence and respect freedom of expression and peaceful assembly”.

Civilian groups called for two days of general strikes and civil disobedience starting on Tuesday to protest the latest violence. Resistance committees organising protests in Khartoum and its adjoining cities of Omdurman and Bahri called on people to barricade local streets.

Last week, the United Nations began consultations to try to break a deadlock between military leaders and pro-democracy civilian groups and avert the risk of further instability.

Hamdok, who had failed to name a government as protests continued against the military takeover in October, said a roundtable discussion was needed ...
News
5 months ago

Sudan's Abdalla Hamdok has resigned as prime minister after failing to nominate a government under a deal with military coup leaders.
News
5 months ago

Security forces shot dead three people during nationwide protests in Sudan on Saturday, a doctors committee said, as hundreds of thousands of people ...
News
7 months ago
Next Article