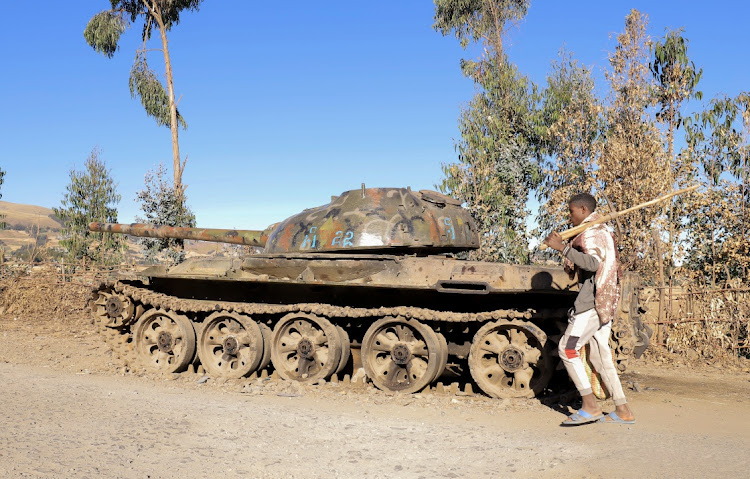 In a roadside village shattered by one of Africa's bloodiest current conflicts, a donkey and its young, turbaned master tiptoe past an unexploded shell rusting by the blasted remnants of a tank, its turret and tracks tossed sideways.

Ethiopian soldiers said the tank's crew had been fighting for Tigray, the rebellious northern region battling the central government. In June, Tigrayan fighters invaded the neighbouring regions of Afar and Amhara, pushing so far south that by the end of November they were fighting near a town just 190 kilometres (118 miles) from Ethiopia's capital, Addis Ababa.

Now the tables have turned.

A government offensive has driven Tigrayan forces back on multiple fronts. Locals are returning to homes scarred not just by intensive fighting but by what they say are atrocities committed by Tigrayan fighters - a charge the rebels deny.

Just outside the mountainous Amhara town of Gashena, around 150km east of Lake Tana, the source of the Blue Nile, a Reuters reporting team saw evidence of a fierce battle fought within the last week.

Abandoned zig-zag trenches sliced the red-orange sandy soil parallel to the road. The shattered tank lay on the edge of a village nestling in a grove of eucalyptus trees decapitated by heavy gunfire or air-bursting shells.

"There is hand-to-hand conflict about 6 kilometres away," said an Amhara militiaman in the town. "But you are safe here. It's just small groups."

As he spoke, an emplacement of mobile field guns in the greenery close by fired off repeated volleys.

The World Food Programme (WFP) has suspended food distribution in Ethiopia's Kombolcha and Dessie towns after looting of supplies that staff were ...
News
5 months ago

Gashena mayor Molla Tsega told Reuters that the town, captured by Tigrayan forces in July, was now back in government hands. He said schools and medical clinics had been looted and destroyed, and that Tigrayan forces had killed at least 53 civilians.

Tigrayan fighters had also raped several women, he said. "The war has had an intolerable effect on the poor people here."

Reuters could not independently verify the accusations, but they fit a pattern of attacks reported elsewhere in Amhara by human rights organisations.

Tigrayan forces summarily executed dozens of civilians in two towns they controlled in Amhara between Aug. 31 and Sept. 9, a report released on Friday by New York-based Human Rights Watch said.

Reuters was unable to reach Tigrayan forces for comment. Getachew Reda, spokesman for the Tigray People's Liberation Front (TPLF), the party that controls most of Tigray, has previously denied targeting civilians in areas under its control.

The TPLF has said that Tigrayan forces entered Amhara to break a de facto government aid blockade on Tigray and free western Tigray - a contested area - from Amhara control.

The government has denied United Nations accusations it was blocking food aid to the famine-hit region.

Daniel Bekele, head of the Ethiopian Human Rights Commission, said reports by villagers of abuses in Amhara, including killings, rapes and destruction of property were widespread and credible.

They mirrored, he said, similar crimes committed by both sides earlier in the conflict, when fighting was taking place in Tigray.

"It seems to be a cycle of revenge attacks on poor communities," Bekele said in an interview in Addis Ababa.

A joint investigation released last month by the United Nations and Bekele's commission concluded that all sides had committed violations that may amount to war crimes.

Ethiopian Prime Minister Abiy Ahmed said his foes had been defeated and promised to recapture territory in the region of Amhara from rebellious ...
News
5 months ago

ABIY TO THE FRONT

"We will continue the remaining areas ... nothing will stop us. The enemy will be destroyed," he said this week.

The offensive recaptured many towns this month, the prime minister's office said, pushing Tigrayan forces back more than 180 km.

Debretsion Gebremichael, the TPLF president, has described the withdrawal as a "territorial adjustment" that was part of a broader plan to secure Tigray.

"Pulling out was a must," he said in a video posted online this week, citing foreign intervention by unnamed powers as one reason why the military was making gains. "The enemy is getting stronger; we also have to be strong and intensify our struggle."

Several government soldiers near Gashena told Reuters they had been reinforced by a huge influx of new troops, and airstrikes and drones had hit Tigrayan positions. Ethiopia has bought drones from Turkey and the United Arab Emirates.

Neither side has released casualty figures, but soldiers reported heavy losses on both sides. Reuters saw six ambulances speeding from Gashena towards the rear lines in five hours.

"Now our priority is to liberate ourselves," Gizachew Muleneh, spokesman for the Amhara region, told Reuters. Tigray's forces would be pursued, he said. "We will not stop our offensive until we have eliminated them."

Only combatants, not civilians, were struck in an air strike this week in Ethiopia's Tigray region, the country's military spokesman said on Thursday.
News
10 months ago

Ethiopia will show a sceptical world that it can successfully hold a peaceful election next week, Prime Minister Abiy Ahmed told a crowd of tens of ...
News
11 months ago

An analysis by United Nations agencies and aid groups estimates that about 350,000 people in Ethiopia's conflict-torn Tigray region are in famine ...
News
11 months ago
Next Article