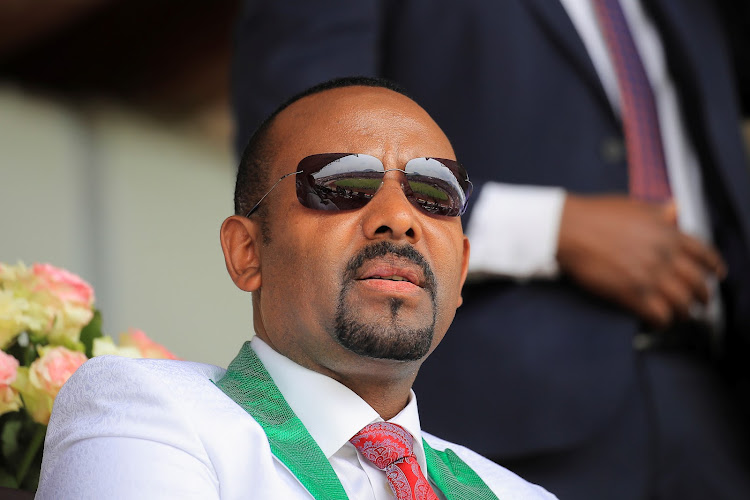 Ethiopian prime minister Abiy Ahmed, whose army has been battling forces from the northern region of Tigray for more than a year, said he was headed to the frontline last week to supervise operations.
Image: REUTERS/Tiksa Negeri

Ethiopian Prime Minister Abiy Ahmed said his foes had been defeated and promised to recapture territory in the region of Amhara from rebellious Tigrayan forces after praising military victories against the Tigrayans in the region of Afar.

Footage from the front that aired on state-affiliated Fana Broadcasting on Tuesday showed Abiy wearing military jungle fatigues and cap and scanning the horizon with binoculars.

"The East Command secured an unimaginable victory in just one day of planning and a day and half long fighting," he said. "Now we will repeat that victory in this front.”

Fana said he was addressing troops on the frontlines of the Ethiopian conflict, near Gashena in Amhara region. Reuters could not independently verify his location.

"The enemy is defeated. Our remaining task is to rout the enemy and destroy them," he told soldiers assembled under a clump of trees.

Abiy, whose army has been battling forces from the northern region of Tigray for more than a year, said he was headed to the frontline last week to supervise operations.

State media reported over the weekend that the army recaptured the town of Chifra in Afar region and other areas, after Abiy arrived. Reuters had no way to independently verify the announcement.

A newly-formed alliance of Ethiopian opposition factions set a goal on Friday of bringing down Prime Minister Abiy Ahmed by force or negotiation to ...
News
7 months ago

"Tigrayan youth are falling like leaves. They should know that they have been defeated and surrender starting from today," Abiy, a Nobel Peace laureate, said in the footage.

Getachew Reda, the spokesman for the Tigrayan People's Liberation Front (TPLF), the main force fighting the federal government, could not be reached for comment.

The Tigrayan forces have threatened to push into the capital Addis Ababa or to try to cut a corridor linking landlocked Ethiopia with the region's largest port.

The TPLF dominated national politics until Abiy took power in 2018. Since the conflict eruped a year ago, the war in northern Ethiopia has killed thousands and displaced millions in Africa's second most populous nation.

Tigrayan forces were initially beaten back, but recaptured most of the region in July and pushed into neighbouring Amhara and Afar, displacing hundreds of thousands more people.