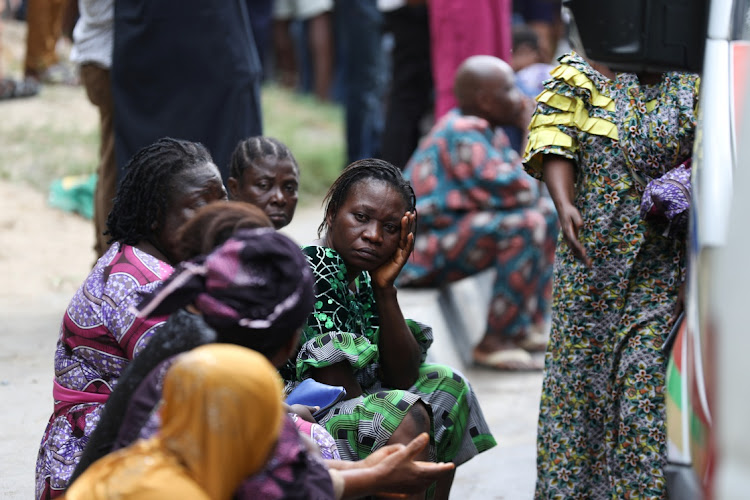 Relatives wait outside as rescue workers continue to conduct search and rescue effort at the site of a collapsed building in Ikoyi, Lagos, Nigeria on November 2, 2021.
Image: REUTERS/Temilade Adelaja

Hopes are fading of finding survivors four days after a high-rise apartment block building under construction collapsed and trapped scores of people in the Nigerian commercial capital of Lagos, officials said.

Ibrahim Farinloye, head of the national emergency unit in Lagos, said the death toll stood at 36. The Lagos state emergency agency put the casualty number at 29 and said eight people had been critically injured.

Large crowds, including anxious family members, have been gathering daily near the site of the collapse, now a pile of broken masonry and mangled steel.

Lagos governor Babajide Sanwo-Olu on Thursday said a six-member panel of engineers, architects and town planers had been appointed to "bring closure to this event and ensure that justice is served".

The panel has a month to present its findings.

Building collapses are frequent in Africa's most populous country, where regulations are poorly enforced and construction materials often substandard.

Phone numbers for the project owner, main contractor, project manager, structural engineers and architects listed near the collapsed building could not be reached when Reuters called on Thursday.

The collapsed building, in the affluent neighbourhood of Ikoyi, was one of three planned high-end apartment blocks.

Moshood Adesola, a witness who works in a nearby office, told Reuters that more than 50 people worked at the site daily. - Additional reporting by Lanre Ola

Nigeria races to find survivors as 22 die in building collapse

Anxious family members and large crowds gathered near the site of the incident hoping to hear news on the fate of those still trapped under chunks of ...
News
3 weeks ago

At least six people have died in Nigeria's commercial capital of Lagos after the collapse of a high-rise building that was under construction, the ...
News
3 weeks ago

Tributes for TB Joshua: A 'man of God' who gave to the poor, say followers

Tributes are flowing in for televangelist TB Joshua of the Synagogue Church of All Nations, who has died in Nigeria aged 57.
News
5 months ago
Next Article