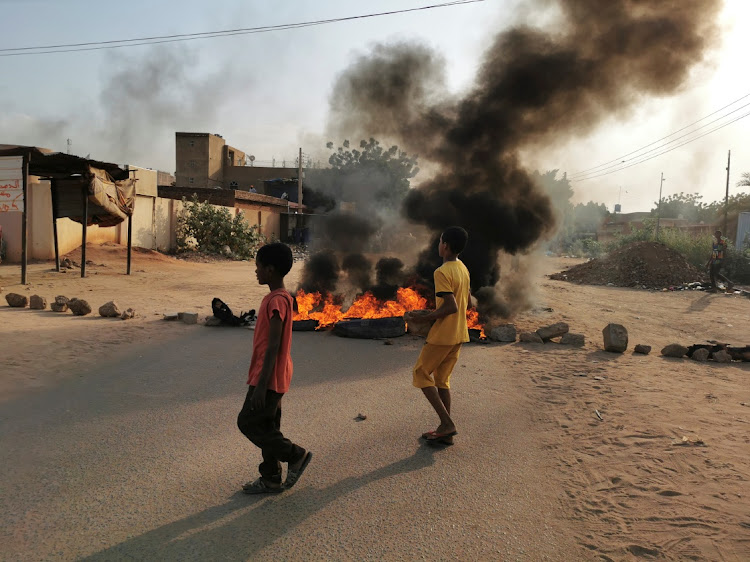 Tens of thousands of Sudanese on Saturday staged protests in Khartoum and other cities to demand the restoration of a civilian-led government to put the country back on a path to democracy after a military coup.

People carried Sudanese flags and chanted "Military rule can't be praised" and "This country is ours, and our government is civilian" as they marched in neighbourhoods across the capital.

Protesters also took to the streets in cities in central, eastern and northern Sudan.

Thousands of Sudanese have already demonstrated this week against the ousting of Prime Minister Abdalla Hamdok's cabinet on Monday by General Abdel Fattah al-Burhan in a takeover that led Western states to freeze hundreds of millions in aid.

In central Khartoum on Saturday there was a heavy military deployment of armed troops that included the army and the paramilitary Rapid Support Forces.

Security forces had blocked roads leading to the defence ministry complex and the airport, as well as most of the bridges connecting Khartoum with its twin cities of Omdurman and Khartoum North.

At least 11 protesters have been killed in clashes with security forces this week and opponents fear a full-blown crackdown.

A 75-year-old man who gave his name as Moatez and who was walking the streets searching for bread said normal life had been brought to a complete halt in Khartoum. “Why did Burhan and the army put the country in this crisis? They could solve the problem without violence,” he said.

State oil company workers and doctors in Sudan said on Wednesday they were joining protests against the military coup that has derailed the country's ...
News
6 months ago

US WARNS AGAINST VIOLENCE

Unlike in previous protests, many people carried pictures of Hamdok, who remains popular despite an economic crisis that had worsened under his rule. "Hamdok is supported by the people. If Hamdok takes the country that's okay," said Mohamed, a member of a neighbourhood resistance committee.

The United States, which is calling for the restoration of the civilian-led government, said how the army reacted would be a test of its intentions.

With internet and phone lines restricted by the authorities, opponents of the coup have sought to mobilise for the protest using fliers, SMS messages, graffiti, and neighbourhood rallies.

Neighbourhood-based resistance committees, active since the uprising https://www.reuters.com/world/africa/sudans-political-turmoil-2021-10-29 against deposed President Omar al-Bashir that began in December 2018, have been central to organising despite the arrests of key politicians.

Bashir, who ran Sudan for nearly three decades, was forced out by the army following months of protests against his rule.

"Close a street, close a bridge, Burhan we're coming straight to you," they chanted.

Burhan has said he removed the cabinet to avert civil war after civilian politicians stoked hostility to the armed forces.

He says he is still committed to a democratic transition, including elections in July 2023.

Hamdok, an economist, was initially held at Burhan's residence when soldiers rounded up the government on Monday, but was allowed to return home under guard on Tuesday.

The United States and the World Bank have already frozen assistance to Sudan, where an economic crisis has seen shortages of food and medicine and where nearly a third of the population are in need of urgent humanitarian support.

Sudan's military coup leader said a technocratic prime minister could be announced in a week, and he is still trying to persuade the man he ousted to ...
News
6 months ago

Sudan decided to halt the entry of vessels carrying fuel into its territorial waters to avoid incurring fines due to delays in offloading, Asharq TV ...
News
7 months ago
Next Article