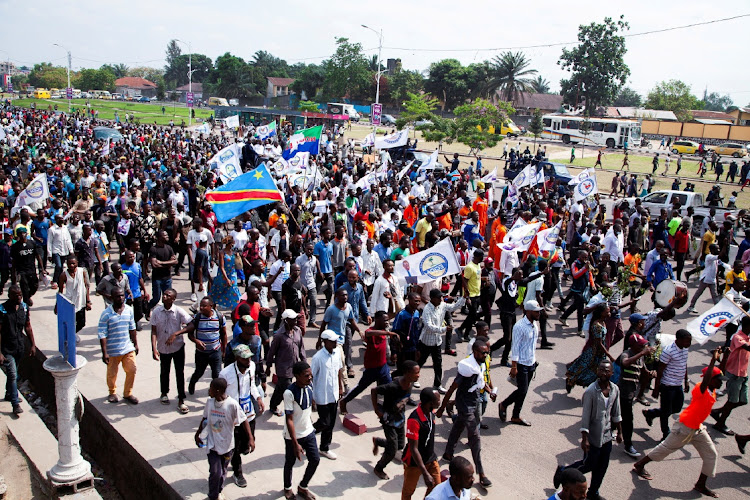 Supporters of opposition leader Martin Fayulu, demonstrate during the independence of the country’s electoral commission, in Kinshasa, Democratic Republic of Congo, on October 16 2021.
Image: REUTERS/Justin Makangara NO RESALES. NO ARCHIVES

Police in Democratic Republic of Congo used tear gas to break up clashes between supporters of the president and an opposition leader on Saturday, as lawmakers selected a new head of the electoral commission.

The National Assembly chose Denis Kadima, an election expert with decades of experience, to lead the Independent National Electoral Commission (CENI), a body that political analysts and diplomats criticised for its role in the disputed 2018 vote where Felix Tshisekedi emerged as president.

Tshisekedi is expected to seek a second term when Congolese voters return to the polls in 2023, with CENI likely to play a pivotal role again.

"His (Kadima's) electoral expertise is not disputed," said Tresor Kibangula, of the Congo Research Group at New York University. "However, the fact that his candidacy was pushed behind the scenes by people close to President Felix Tshisekedi quickly raised suspicions about his independence."

Opposition leader Martin Fayulu and Tshisekedi formed an electoral pact in the run-up to the 2018 election, but Tshisekedi eventually split off to form another political group before the vote.

Amid widespread accusations of fraud, the CENI declared Tshisekedi the winner, while Fayulu, who said he had won a landslide victory, came second.

On Saturday, around 10,000 Fayulu supporters marched through the streets of Kinshasa in protest over several issues including the accusation the process to select the leadership of the CENI was being influenced by politicians.

The World Health Organisation said on Friday it is deploying experts on preventing sexual exploitation in 10 "high-risk" countries, after a major ...
News
1 month ago

Police fired tear gas to break up clashes in the Limite neighbourhood between Fayulu's followers and those of Tshisekedi, who hurled petrol bombs at the protesters, according to Reuters witnesses.

Standing on the back of a truck, Fayulu told a large crowd of supporters that Congo needed an independent and transparent CENI, and a CENI president who would publish "the real results".

Albert Malukisa, a political science professor at the Catholic University of Congo, said Tshisekedi had already managed to gain control of the constitutional court.

"With the CENI, he can be confident of winning the next elections," he said.

Religious groups, who are mandated by the constitution to nominate the leadership of the CENI by consensus, have been at loggerheads for months and failed to reach agreement.

Leaders of the Catholic and Protestant churches say they have been pressured and threatened.