Two deaths shine spotlight on violence against women in Kenya 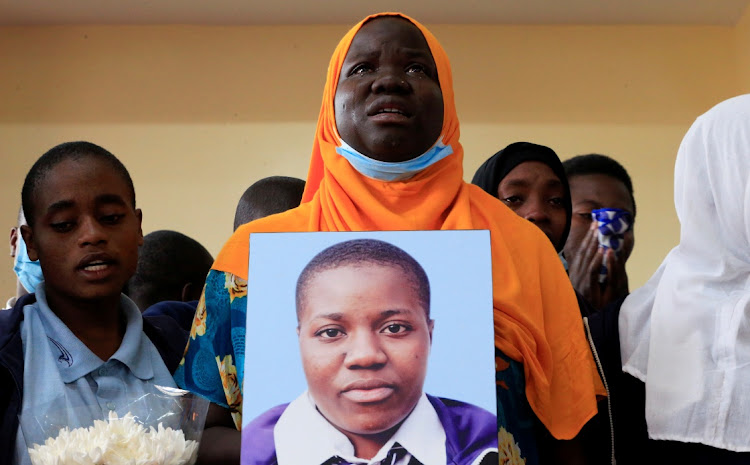 Dafida Hassan Yusuf, form four class teacher at the Kibera Girls School Soccer Academy (KGSA), reacts after attending the memorial service for Cynthia Makokha (on the photograph), a teenage student who was raped and killed as she travelled home for school holidays, in Kibera district of Nairobi, Kenya on October 15, 2021.
Image: Thomas Mukoya

Cynthia Makokha was a 17-year-old student and volleyball player. Agnes Tirop was a 25-year-old rising athletics star, who finished fourth in the 5,000m race at the Tokyo Olympics and had won two World Championship bronze medals.

Both women were found dead in Kenya this week, and while their murders are not linked they have shone a spotlight on violence against women, which the government says has grown worse since the start of the Covid-19 pandemic.

Tirop was found in her bed at her home in the town of Iten, with multiple stab wounds to the neck. Police on Thursday arrested a man they described as her husband, whom they called "the main suspect." 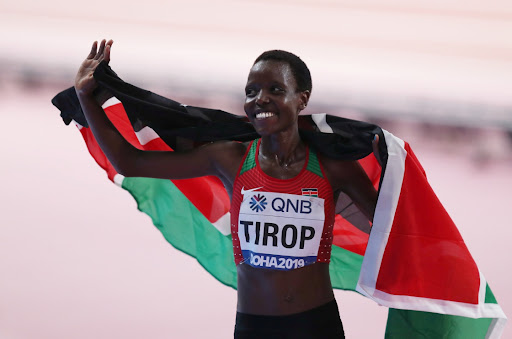 Makokha, who was a student at the Kibera Girls Soccer Academy in Nairobi, was raped, killed and then dumped in a river. She had been on her way to visit family in Western Kenya on Oct. 4 when she disappeared. Her body was found days later.

Nearly half of women in Kenya experience gender-based violence over the course of their lifetimes, and a third of Kenyan girls experience some form of sexual violence before turning 18, according to the Gender Violence Recovery Centre at the Nairobi Women's Hospital.

"I'm scared," said 17-year-old Latifah Shaban, who shared a bunk bed with Makokha. She said Makokha often woke up at 3am, cracked the hallway door open, and used that light to study. "I've heard a lot of rape cases. I'm just always scared about men… it's worse," she said.

The school's dorms are only a few months old, created to help protect the girls, many of whom come from vulnerable living situations, administrators said.

"As much as we are trying to ensure that the girls are safe, outside they…. are not safe," said Claris Akinyi, the school's principal.

Kenyan police said on Thursday they had arrested the husband of distance runner Agnes Tirop, a two-times World Championship bronze medallist who was ...
News
1 month ago

Tirop's family told Kenya Television Network that she had separated from the man suspected of killing her because she suspected he had cheated on her when she was competing in Japan.

Police say that after Tirop's murder, they found a new athletics trophy, still carefully wrapped, in her living room.

On social media, fellow athletes and politicians shared messages of condolence, as did sportswear manufacturer Adidas and the World Athletics governing body.

"Agnes was an incredible person, a record breaking athlete and a beloved member of our family," Adidas posted.

At Makokha's school, rows of seated girls passed around tissues to wipe their tears as they remembered their fellow student. One girl untied her sweatshirt from around the waist to cry into it; another clutched a poster saying: "STOP KILLING."

Caster Semenya puts aside controversy to win women's 1,500m and break her own South African record time.
Sport
3 years ago