Refugees distrusted and abused by both sides' fighters 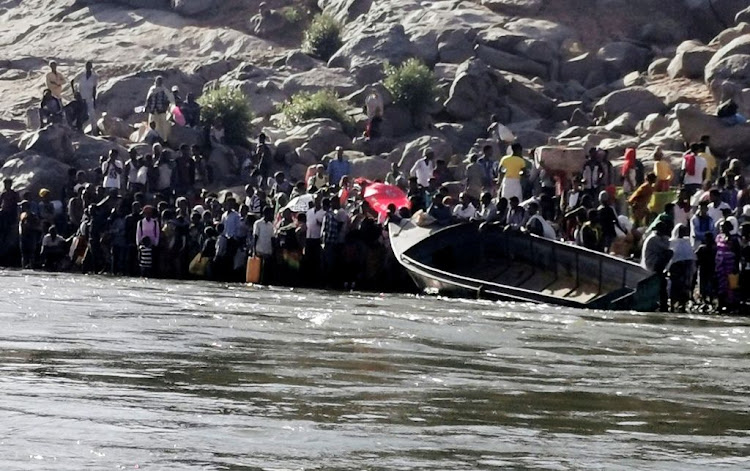 Ethiopians who fled the ongoing fighting in Tigray region prepare to cross the Setit River on the Sudan-Ethiopia border in Hamdait village in eastern Kassala state, Sudan, on November 14 2020.
Image: REUTERS/El Tayeb Siddig

Human Rights Watch's report detailed attacks around two camps in Tigray, where local forces have battled the Ethiopian government and their Eritrean allies since November in a conflict that has rocked the Horn of Africa region.

Tens of thousands of Eritrean refugees live in Tigray, a mountainous and poor province of about 5 million people.

Tigrayans distrusted them because they were the same nationality as occupying Eritrean soldiers, Eritreans because the refugees' loyalty was suspect after they fled their homeland.

"The horrific killings, rapes, and looting against Eritrean refugees in Tigray are clear war crimes," said Laetitia Bader, Horn of Africa director at Human Rights Watch (HRW), whose work - first reported by Reuters - drew on interviews with 28 refugees and other sources, including satellite imagery.

Eritrea's minister of information did not immediately return calls seeking comment, but Eritrea has previously denied atrocities and said their forces have not targeted civilians.

A spokesman for the Tigray People's Liberation Front said formal, uniformed Tigrayan forces had only recently moved into the area and that it was possible abuses were committed by local militias.

"It is mostly the last month or so that our forces moved into those areas. There was a huge Eritrean army presence there," Getachew Reda told Reuters. "If there were vigilante groups acting in the heat of the moment I cannot rule that out."

International investigators were welcome to visit the area, he said.

Prior to the Tigray conflict, Ethiopia hosted around 150,000 Eritrean refugees, fleeing poverty and authoritarian government.

Much of the report focused on two camps - Shimelba and Hitsats - destroyed during the fighting. HRW cited U.N. refugee agency UNHCR figures that 7,643 out of 20,000 refugees then living in Hitsats and Shimelba camps are still missing.

UNHCR, the United Nations refugee agency, said it was "appalled" at the reports of "immense suffering" in refugee camps, which it was unable to access from November to March.

'IN EVERY HOUSE, PEOPLE KILLED'

"In every house, people were killed," one resident told HRW.

"My husband had our 4-year-old on his back and our 6-year-old in his arms. As he came back to help me enter the church, they shot him," one refugee told Human Rights Watch.

The report said that HRW had been unable to determine the extent that Tigray's formal forces directly commanded over local Tigray militias operating around Hitsats.

Refugees around the villages of Zelasle and Ziban Gedena, northwest of Hitsats, reported being shot at and attacked with grenades. Tigrayan forces marched fleeing refugees back to Hitsats, shooting some stragglers, refugees reported to HRW. Some women also said they were raped by Tigrayan fighters as they fled. One 27-year-old woman said Tigrayan fighters raped her along with her 17-year-old sister.

In the northernmost camp, Shimelba, Eritrean forces killed at least one refugee, raped at least four others and killed local residents, HRW said.

The violence and severe food shortages forced some refugees to return to Eritrea. Others fled south to two other camps, Adi Harush and Mai Aini. Tigrayan forces took over those camps in June and refugees have reported killings and looting.

"We are extremely worried about the current situation of over 20,000 Eritrean refugees living in Mai Aini and Adi Harush camp in southern Tigray," UNHCR told Reuters on Wednesday, saying there were severe food and water shortages and healthcare was unavailable.

Arms flown to Sudan from Ethiopia were legal, says ministry

Sudan's interior ministry said on Monday that more than 70 boxes of weapons seized by authorities had turned out to be part of a legal cargo imported ...
News
9 months ago

For the first time in nine months of war in Ethiopia's Tigray region, aid workers will run out of food this week to deliver to millions of people who ...
News
10 months ago
Next Article