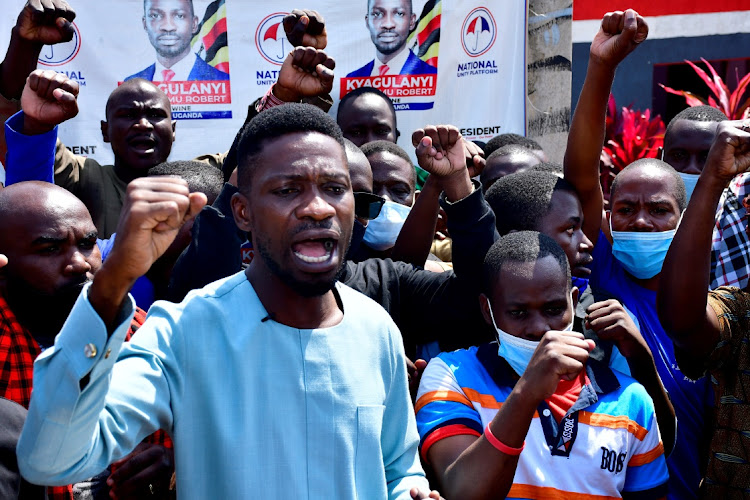 FILE PHOTO: Riding on his youthful energy and his fame, 39-year-old Wine, who is also a pop star, has gathered a large youth following.
Image: REUTERS/Abubaker Lubowa/File Photo

Wine's opposition National Unity Platform (NUP) dismissed the prosecution of the two MPs, Muhammad Ssegirinya and Mr Allan Ssewanyana, both NUP members, as a politically motivated attempt by authorities to smear the party.

Appearing at a court in Masaka town in central Uganda, south of the capital Kampala, the two were charged with the three murders and remanded in prison, Joel Ssenyonyi, a fellow NUP lawmaker and the party's spokesperson, told Reuters.

Security agencies have been investigating a spate of killings of at least 26 people in a wide area around Masaka in recent weeks.

In accounts widely reported in local media, machete-wielding men would arrive at victims' homes in the middle of the night and cut them to death. Most of those killed were elderly people.

The area where the attacks have occurred voted overwhelmingly against incumbent President Yoweri Museveni, 76, in a presidential election in January 2021.

Police on Monday said they had arrested 23 suspects linked to the killings, adding some implicated the two lawmakers during interrogation as "the masterminds behind the vicious murders."

Uganda's opposition leader Bobi Wine was briefly detained on Monday as he led an anti-government demonstration in the capital, his latest effort to ...
News
10 months ago

The motive, police said, citing suspects, was to attack elderly residents who had voted for Museveni. Information minister Chris Baryomunsi last month told local television that politicians were behind the killings, but did not name them.

"This is just a plan they hatched to implicate the opposition ... they know the real killers," Ssenyonyi said.

Riding on his youthful energy and his fame, 39-year-old Wine, who is also a pop star, has gathered a large youth following. Wine, whose real name is Robert Kyagulanyi, has presented a formidable challenge to Museveni and his ruling National Resistance Movement party.

Museveni, who has ruled Uganda since 1986, was ultimately declared winner of the election, although Wine rejected the results as fraudulent. The United States and other western countries said the poll lacked credibility.