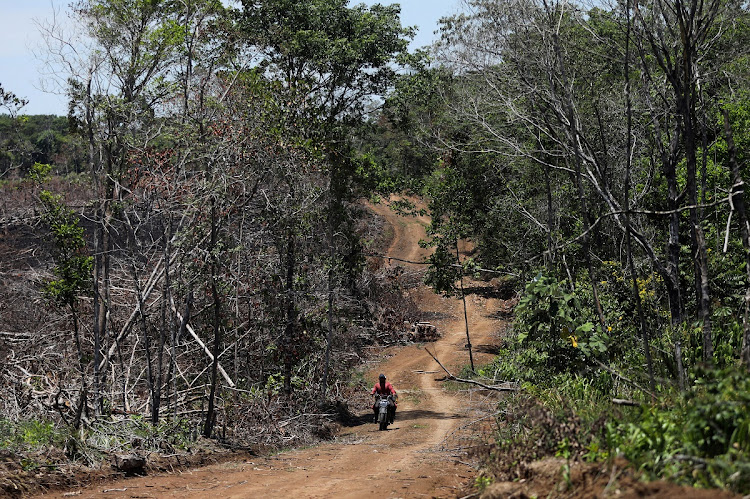 Authorities say thousands of people live illegally in the Mau forest, clearing trees for farmland and destroying its essential water source, while the settlers say they have valid title deeds.
Image: Luisa Gonzalez/Reuters

When the stream in his village in Kenya's western Kericho County dried up 15 years ago, Wilson Towett had to ferry water each day from another river several kilometres away during the two-year dry spell that followed.

But much has changed since then.

Within two rainy seasons, it was in full flow again.

"We learned the hard way 15 years ago... That's when we quickly went back to what our fathers and grandparents had been teaching us," said Towett, a 69-year-old father of seven.

"We eventually saved the stream and have taken it upon ourselves to teach our children and grandchildren not to destroy the thickets here," he told the Thomson Reuters Foundation.

As the East African country looks to rein in rapid deforestation that has threatened water sources and livelihoods, conservationists and officials have hailed the revival of Cheplanget's essential water source as an example of successful community-led conservation.

By using traditional wisdom to tackle modern-day environmental challenges, such as deforestation and water scarcity, villagers can ensure their efforts are effective and sustainable, environmentalists say.

"Since these communities can relate to the link between indigenous forest, their conservation and water security, they have a better appreciation for restoration and rehabilitation initiatives," said Brian Waswala Olewe, a wildlife and landscape ecologist at Kenya's Maasai Mara University.

The indigenous trees along the stream in Cheplanget not only help maintain its water supply, but also serve another purpose - the villagers harvest the mature bark to use in traditional medicines, which can be done without cutting down the trees.

"I wouldn't want my children or grandchildren to lack water here. It is our duty to protect the stream and it will give us water for as long as we like," said Towett, as he inspected young seedlings growing along the river.

Globally, tropical forest loss hit its third-highest level in almost two decades in 2020, according to the Global Forest Watch (GFW) monitoring service, causing concern about the impacts on efforts to curb climate change.

The disappearance in 2020 of 4.2-million hectares of primary forest - intact areas of old-growth trees - worldwide roughly equals the size of the Netherlands.

In Kenya, 49,400 hectares of primary forest disappeared from 2002-2020, representing just 14% of all the trees the country lost in that period, GFW data shows.

Forests provide food and livelihoods for people living in and near them, while trees absorb about a third of the planet-warming carbon emissions produced worldwide.

The rapid disappearance of tree cover means water sources for communities also come under threat, as without trees to keep the soil together, disintegrating riverbanks cannot hold water.

That is what happened in a village neighbouring Cheplanget, called Ainamoi, where local springs have run out of water and an area that was once swampland is now dry enough to farm on.

The stream in Ainamoi dried up two decades ago after the locals started clearing bushes for firewood and planted exotic trees for income like eucalyptus, which needs a lot of water.

"We are struggling to find water even during the rainy season. That never used to be the case," said Julius Kosgei, 74, a village elder who lives next to the empty stream.

About a decade ago, he convinced the local authorities to put in place measures to tackle the village's water problems.

Now, under local regulations, non-indigenous trees must be planted at least 30 metres (98 feet) away from water bodies.

Since 2009, Kenyan law has banned the planting of eucalyptus on riparian land and in water catchment areas, with the Environment Ministry linking it to water shortages in some areas.

But Richard Bett, the area chief who oversees Ainamoi and Cheplanget, admits the rules are hard to enforce.

In Ainamoi, villagers ignore the laws and removing the trees by force is difficult - every time his team gets rid of one eucalyptus, three more sprout up in its place, he said.

As the villagers in Cheplanget showed, the solution needs to come from the community itself, Bett said.

"A change of heart among the villagers would be a win (when) they accept change and work towards protecting their own water source," he said by phone.

Only about 30% of sub-Saharan Africa's population has access to a safely managed drinking water service, according to UN statistics, pointing to an acute problem.

In 2019, the Kenyan government started evicting people from the country's largest forest in a move it said was aimed at saving what is called Kenya's most important "water tower" as it channels rainwater into a dozen major rivers and lakes.

Authorities say thousands of people live illegally in the Mau forest, clearing trees for farmland and destroying its essential water source, while the settlers say they have valid title deeds.

For longer-lasting solutions that provoke less tension, communities should be given the resources to find their own ways to better manage their land and protect water sources, said ecologist Olewe.

"It ensures (the) sustainability and replication of best practices can be passed onto future generations," he said.

In Ainamoi, elder Kosgei said his community was well aware of the dangers that clearing bush and felling trees pose to the village, but people were too focused on the constant struggle to find water to come up with a long-term fix on their own.

He would like to see the local government do more to stop villagers growing eucalyptus and organise the planting of indigenous vegetation along the stream.

"Before all of us can start to change (our lifestyles) and protect the water sources here, we still suffer from a lack of water," he said.