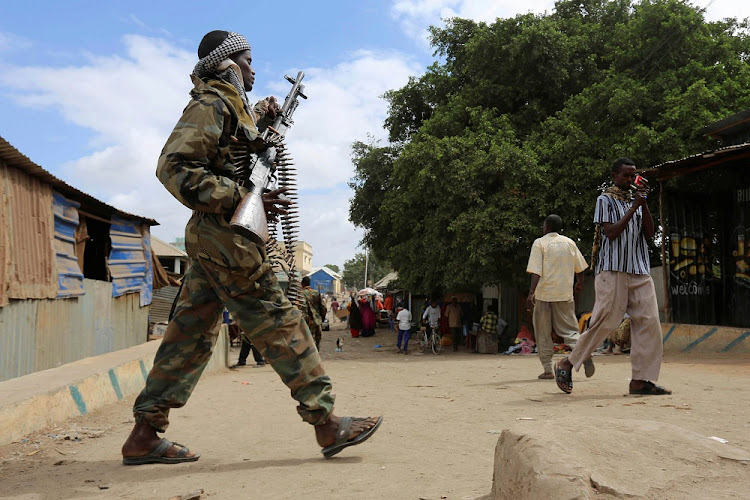 Al Shabaab militants have launched an attack on a government base in the town of Amara this morning.
Image: REUTERS/Feisal Omar/ File photo

Al Shabaab fighters stormed a military base in the centre of Somalia on Tuesday and recaptured a town it lost to government forces earlier this month, eyewitnesses said.

Residents of Amara in the Galmudug region said the morning assault started with a suicide bomb attack which targeted government special force units, known as Danab and Darawish.

The Somali Army and Darawish forces responded with air strikes and “triumphed” over the attacking al Shabaab forces, killing “several” combatants, according to state media which did not providing details on casualties or the status of the military base or town.

Amara is a strategic town which lies on the route to the coastal town of Harardheere, another al Shabaab stronghold. Harardheere was once a pirate base at the height of hijackings of merchant ships in 2011.

“Al Shabaab militants have launched an attack on a government base in the town of Amara this morning. The government forces, especially the Danab and the Darawish of Galmudug, withdrew from the area and al Shabaab took control of the area,” Farah Osman, a resident of Amara, told Reuters by phone.

The Ugandan military said on Friday they had arrested a man who was planning a suicide bombing at the funeral of a top police official and had seized ...
News
3 months ago

The two witnesses did not give any details on casualties.

Al Shabaab's Radio Andalus said in a broadcast the group was behind the attack and the capture of the town, adding it had seized 14 cars and 10 gun-mounted pick up trucks.

Officials of Galmudug region were not immediately reachable to comment, nor were spokespeople for al Shabaab.

Earlier this month, government and Galmudug regional forces took control of Amara, which has been under al Shabaab control for the last 10 years.

Their joint operations also liberated several towns from al Shabaab, including Baadweyn, and other villages in the region.

The al Qaeda-linked group often carries out attacks in its war on Somalia's central government. It aims to topple the government and impose its own harsh interpretation of Islamic law.

It has targeted Somali military bases and civilian infrastructure including hotels, bars and schools in both Somalia and neighbouring countries.

A suicide car bomb targeting a government convoy exploded at a busy junction in Somalia's capital on Saturday, killing at least eight people, an ...
News
4 months ago
Next Article