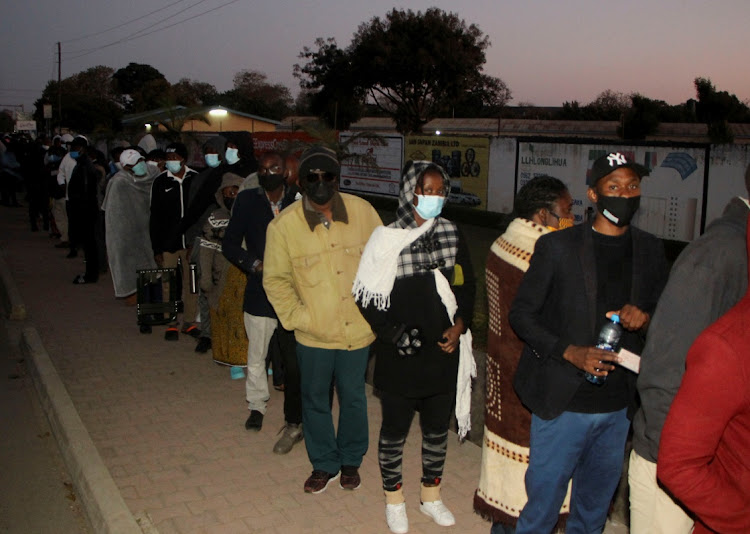 Zambians kept voting at jammed polling stations after polls closed on Thursday, pointing to a high turnout in a showdown between President Edgar Lungu and main opposition rival Hakainde Hichilema that looks too tight to call.

Polls officially closed at 6 p.m. (1600 GMT) but voters were still casting ballots at many stations visited by Reuters in Lusaka as darkness fell. The law allows those in the queue to vote after the official close of polls.

But as millions cast their ballots, social media platforms were restricted in the country, internet blockage observatory NetBlocks said.

“Real-time network data confirm that social media and messaging platforms including Twitter, Facebook, Instagram and Messenger are now restricted in #Zambia on election day in addition to the earlier WhatsApp restriction,” NetBlocks said in a tweet.

The restriction of internet access could fuel tension and suspicion about the outcome of the vote.

Lungu said in a statement late Thursday he had directed the army to send reinforcements to three provinces where violence had broken out and a provincial chairman of his ruling party had been killed.

He blamed the violence on the opposition and said that it had meant the vote in those provinces was not free or fair.

An Electoral Commission of Zambia (ECZ) spokeswoman said on state radio appropriate action would be taken against those involved in the killing.

Lungu and Hichilema voted at different stations earlier and were both confident of winning the vote. The close contest, however, raised the possibility of a run-off.

ECZ says it expects to declare a winner within 72 hours after polls close.

“I hope that whoever wins will promote peace, promote unity and whoever loses can clearly accept defeat,” Musona, an 18-year-old school leaver said after voting in the affluent suburb of Kabulonga in Lusaka.

The winner of the election faces the task of steering Zambia's flagging economy, which became the continent's first country during the coronavirus pandemic to default on its sovereign debt in November.

J.P. Morgan said in a note that the election process could drag on for weeks, potentially stalling much-needed economic reform execution and negotiations with the International Monetary Fund (IMF).

Some 54% of registered voters are 34 or younger, statistics from the electoral agency show.

Political analysts said this could help Hichilema, who is facing Lungu for the third time and has placed the economy front and centre of his campaign.

Zambia's economy will be among the continent's slowest growing this year, the IMF estimates.

Zambia, Africa's second-largest copper producer, owes in excess of $12 billion to external creditors and spends 30%-40% of its revenues on interest payments on its debt, credit rating firm S&P Global estimates.

In office since 2015, 64-year-old Lungu narrowly defeated Hichilema, the CEO of an accountancy firm before entering politics, in a disputed election the following year.

The president has touted the new road, airport and energy projects he has overseen as laying the groundwork for economic development and growth.

But so far his debt-financed infrastructure splurge has failed to pay economic dividends, and unemployment remains high.

Zambia, which became Africa's first pandemic-era sovereign default late last year, said on Friday it had requested a restructuring of its debt under ...
News
1 year ago